The canal, the power station and the barracks: three historic monuments at Carillon 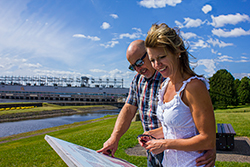 From mid-May to the end of August

Three historic sites link engineering and history: the canal, which opened the way for trade, the hydroelectric power station that provides energy, and the barracks - now a museum - that tell of daily life in another era.

Without the Carillon Canal to bypass the impenetrable Long-Sault rapids, many historic traders would have seen prosperity pass them by.

Learn about the intriguing feats of engineering deployed during the construction of the three phases of the Carillon Canal. The first effort had three locks while the current canal has only one, making navigation more efficient. 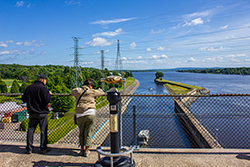 Take advantage of your trip to contemplate the landscape

Then head to the source that powers the lock phenomena - the hydroelectric dam nearby, the most powerful hydroelectric power station on the entire Ottawa River, and another engineering marvel.

At the entrance to the village of Carillon, military barracks stand at attention, watching over the memory of Carillon. Transformed into a museum (French only), this heritage building which hosted a number of regiments over the years, tells the story of the region's 19th century inhabitants.