As Canada's Centennial (1967) approached, many events were planned in celebration. The country re-discovered its origins, especially the meetings of 1864 in Charlottetown and Quebec. An agreement was signed in 1974 between Parks Canada and the Province of Prince Edward Island. Under the terms of the agreement, Parks Canada and the Province agreed to operate the site cooperatively for a period of 99 years. Parks Canada's primary role is to protect and interpret this important site to Canadians for all time. Also as part of the agreement a major restoration project was undertaken by Parks Canada to restore a portion of the building to the 1864 period.

The restoration took place between 1979 and 1983 at a cost of $3.5million. The work was painstaking in its detail and involved extensive research and many talented craftspeople working thousands of hours to complete this major project. Province House was officially proclaimed a National Historic Site on July 1, 1983. 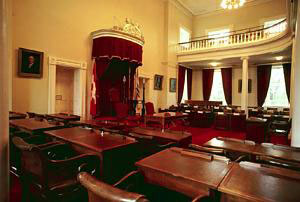 Determining the original nature of the building was not always easy. Numerous and varied alterations confused or obliterated much of the original structure and appearance. Historical and archaeological research was helpful, while investigations of the building confirmed some changes and revealed others. For example, the original floor boards gave evidence of curved railings at both ends of the Confederation Chamber and of a semi-circular dias against the west wall. These features had not appeared in early photographs, although the dias was mentioned in original construction records.

Beginning with the exterior, the sandstone was patched and cleaned and some stones replaced. A roof of slate and copper was installed according to original specifications. Chimneys and skylights were reconstructed.

The interior had seen much painting and plastering. Careful research resulted in the accurate reproduction of original paint types and styles. Some restoration, as in the Confederation Chamber, was formal and refined, even ornate. Other areas received more simple treatment in keeping with the original.

Conservation work at Province House National Historic Site began in 2011, focusing on the preservation of the period masonry to prepare it as the backdrop for 2014 celebrations. There were also some structural upgrades to the building, and measures were taken to make the building weather-tight.

Some of the masonry walls were beginning to show signs of deterioration, so steel reinforcements were added for stabilization (left); A plastic seal was erected around the construction areas in the gallery to try to reduce the amount of dust settling below (right).

Steel beams were screwed into the existing structure inside the interior walls. The steel beam and the pins secured the stone in place.

Despite extensive scaffolding and construction equipment on the South and East sides of the building, visitors to Province House could take advantage of the West and North sides for photo opportunities and to gain access to the building. Both the first and second floors remained open to visitors throughout the construction period. 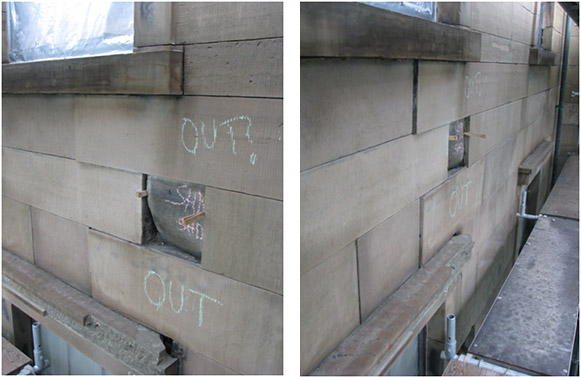 Prior to beginning invasive work on the exterior stone, the conservator carefully inspected the facade and labeled problem areas in chalk. In this case, some stones were protruding from the building while another stone had broken off completely. The conservator wrote “OUT” on the stones that were protruding to indicate that the stones may have to come out so workers could investigate what was causing the displacement.

Workers at the site remove a large stone from the building to investigate what is causing the stone to protrude from the facade. A layer of rubble between the interior and exterior stone was beginning to break down in some places. The mix of cement and stone was eroding due to water seepage. The rubble was repaired, and cracks and fissures were filled to avoid future damage caused by water. This will help to prevent stone displacement in the future.

Workers use hand implements such as an air-powered needle gun to remove the scaling surface of the stone, making the facade smoother, more aesthetic and free of debris. Once problem areas were cleared of loose debris, cracks and discoloration, the stone was filled in using a colour-matched mortar.

Province House continues to make history as it still houses the Legislative Assembly for the Province of Prince Edward Island and is the focal point for political decisions and debates. Cooperatively within the site, staff from Parks Canada and the Province of PEI work together in welcoming thousands of visitors annually.