The Birth of a Nation

Canada dates its birth from July 1, 1867 and its conception from September of 1864. The occasion was a conference to discuss the desirability of union of Britain's North American colonies. The place was Province House, in Charlottetown. 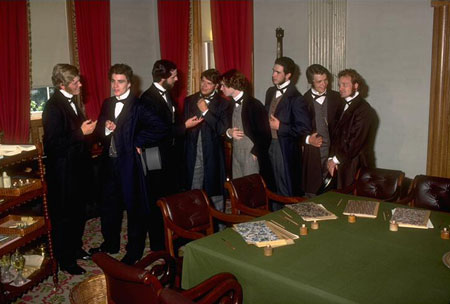 Proposals for colonial union had occasionally surfaced for many years. Richard John Uniacke of Nova Scotia and the Cabinet of United Canada had each suggested it, but the idea had met with little enthusiasm and no action. When the Maritimes colonies agreed that their own union should be subject of a conference, Canada seized the opportunity and her governor wrote to ask if the Canadians might attend. The Maritimes set a date, September 1, 1864; the Canadians were invited to make their presentation, and the rest is history.

Unfortunately, there is no formal record of what was said during the Charlottetown meetings. What we know has been gathered from private sources, such as letters written home by delegates. We do know that there was agreement on detailed discussion of the idea of union. We know that the Maritime delegates put aside their own poorly-supported ideas of Maritime Union, while the Canadians could see solutions to their own problems in a larger union.

Without doubt, external factors encouraged the consideration of a general union, fears of what the United States might do when their Civil War was over were in every mind. All were aware of Britain's growing desire that the North American colonies should look after themselves. yet, it seems clear that what united many delegates, not only in opinion but in spirit, was the grand idea of a new nation.

The spirit of goodwill engendered by powerful politicians meeting each other on a matter of such attractive common interest was enhanced by the sincere and lavish hospitality that met them at every turn. Lunches on the Canadian steamer, Queen Victoria, home entertaining by the Island hosts and a culminating banquet by the City of Charlottetown kept the delegates in a euphoric mood. They enthusiastically journeyed on to Halifax and agreed to meet again in Quebec. 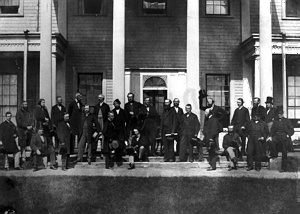 At the October 1864 conference in Quebec, which also included delegates from Newfoundland, the groundwork was laid for the 72 resolutions that would become the framework for the British North American Act.

To ratify the proposals, the provinces of Nova Scotia, New Brunswick and United Canada sent their official delegates to London, England in 1866. Once again, there was agreement and the Parliament of the United Kingdom passed the British North American Act, effective July 1, 1867. It established the Dominion of Canada with its own federal system of government under the British Crown and included the provinces of Nova Scotia, New Brunswick, Quebec and Ontario. In subsequent years, the Dominion grew to include; Manitoba and Northwest Territories (1870), British Columbia (1871), Prince Edward Island(1873), Yukon(1898), Alberta and Saskatchewan(1905) Newfoundland(1949), Nunavut(1999).