A Legislature for Prince Edward Island

The Prince Edward Island Legislature first met in private homes and taverns and, as a door keeper to the legislature remarked, this made for 'a damn queer Parliament'. In 1837 the lieutenant governor, Sir John Harvey, made plain to the legislature his alarm at the colony having no building for the safe custody of its public record. No one could disagree, and there was warm support for a vote of £5,000 to provide a legislative building to house the two branches of the legislature, as well as colonial offices.

Delayed by slow British confirmation of this proposal, action began in 1839 with a public design competition. The additional need for accommodation for the Supreme Court further delayed matters until the legislature voted another £5,000 in 1842.

The competition was won by the leading Island architect/builder, Issac Smith, who had been responsible for most of the Island's existing public buildings. Although Smith had no formal architectural training, his work stands the test of time and comparison.

Issac Smith's plans were for a three-storey stone structure of classic proportions and detail with a central portico and substantial columns. This was in keeping with 19th century interest in Greek and Roman styles for public buildings and was thought particularly suitable for a legislature.

When tenders for trades were accepted, it was found necessary to leave the Island only for stone, which was brought from Nova Scotia. Stone-masonry, brick-laying, carpentry, joinery, plastering, slating, painting, glazing, sheet metal working and excavating were all done by Islanders, proud that the new Colonial Building was indeed a local accomplishment.

The cornerstone was laid in May of 1843 - a band, a parade, and a speech by the lieutenant governor were some of the events marking the occasion.

The first session of the Prince Edward Island Legislature, held in the new Colonial Building in January 1847, marked the official opening of the structure. The small Island community had designed, built and furnished a major public building comparable to those in other British colonies in North America. The Colonial building represented the epitome of Island craftsmanship during the mid-19th century, a time of unprecedented prosperity and optimism.

In older countries, the visitor is struck by the atmosphere and ambience created by public buildings used steadily throughout the centuries. In such places, history seems to come alive. This quality is in Province House, with today's provincial legislature still meeting in the assembly chamber first used in 1847. 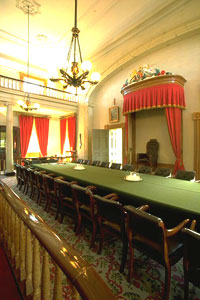 With 27 members, Prince Edward Island has the smallest Provincial Assembly in Canada. These elected officials are assisted by the staff of the Legislative Assembly Office, an essential part of the democratic process, headed by the Speaker.
The Speaker has two separate but closely related roles. In the Legislative Assembly he or she serves as an impartial referee, controlling the flow of business and ensuring that all MLA's have an equal chance to air their views. The Speaker is also an administrator, maintaining the records of the Assembly and providing financial and administrative information.

The Speaker has two assistants to help carry out his or her duties. The Deputy Speaker referees the debates when the Speaker cannot be present and also serves as Chairman of the two committees of the whole Assembly where the Speaker's presence, by tradition, is not allowed.

The Speaker has another deputy, the Clerk, and his or her own police force, the Sergeant-at-Arms. Both positions date back to the 14th century. At that time, the Clerk's most important skills were reading and writing. Most people, including most Members of Parliament, could do neither, so the Clerk read petitions, bills and resolutions to the Assembly and kept House records. The modern Clerk advises the Speaker on procedure and calls the daily order of business; as well, he still reads petitions. Outside the Chamber he is responsible for keeping records and producing House documents.

The Sergeant-at-Arms is responsible for MLA security, both in the House and in their constituencies. He also has custody of the mace, and in the procession that begins each day's sitting, he carries the mace to the Table, where it remains throughout the sitting as a symbol of the Assembly's authority.

The Clerk Assistant and Clerk of Committees backs up the Clerk and is responsible for producing the House's daily agenda and minutes, and for the safekeeping of House documents. He also provides administrative support to the committees the House establishes to deal with various matters of public interest.

During the Charlottetown Conference in 1864, the Assembly Chamber was the setting for a colourful ball hosted by Islanders for the conference delegates. Truly, the past and present unite at Province House.

Did you know that...