1. As a child, Montgomery hated wearing high buttoned boots. She liked to go barefoot as most of the children did. Little did she know at the time that those boots were envied by the other girls in class.

2. Montgomery's first publication was The Legend of Cape Leforce, a poem printed in a Charlottetown newspaper when she was only 15.

3. In 1883, the Marco Polo, once known as the fastest sailing ship in the world, was driven ashore off Cavendish. One of the many Cavendish residents to witness this was the 9 year old Lucy Maud Montgomery, who went on to publish a poem recounting the event.

4. Before it became known as Green Gables, the house and farm belonged to David and Margaret Macneill, neighbours and cousins of Montgomery. Later, David and Margaret's niece, Myrtle, married Ernest Webb and they raised their family and operated the farm until they sold it in 1936 and it became part of Prince Edward Island National Park in 1937.

5. Before marrying Reverend Ewan Macdonald in 1911 at her Campbell cousins' home in Park Corner, L.M. Montgomery and Macdonald were secretly engaged for 5 years.

6. On 19th century farms, people produced most of what they needed to survive. For example, according to the 1861 census, the Macneill's produced 360 pounds of cheese and 260 pounds of butter. Any surplus could be traded with neighbours or merchants for other goods or services.

7. Before it was provided with a proper name and a place in literary history, Lover's Lane was a humble cowpath leading to back pastures on the Macneill/Webb farm. 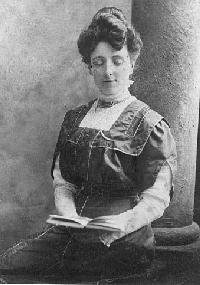 L.M. Montgomery, 1908
Around the time Anne of Green Gables was published.

8. Anne of Green Gables was the first novel which L.M. Montgomery published. This was in 1908 by the L.C. Page Co. of Boston, Massachusetts.

10. Some incidents described in Anne of Green Gables were inspired by real life. When Anne puts liniment instead of vanilla into a cake she's baking, L.M. Montgomery was remembering the following occasion. Her landlady at one of the homes where she boarded while teaching mistakenly "flavoured" a cake with liniment, and the gentleman to whom it was served enjoyed it greatly!

11. L.M. Montgomery's works are widely read in Poland, among many other countries. The first non-English version of Anne of Green Gables was in Swedish, in 1909.

12. L.M. Montgomery was the first Canadian female author to be made a member of the Royal Society of Arts and Letters of London, England.

13. In a personal letter to Montgomery, Mark Twain once called Anne the "most lovable childhood heroine since the immortal Alice".

14. Before the funeral service for Lucy Maud Montgomery in April 1942, people visited Green Gables (still Montgomery's friends' home at the time) to pay their respects to the author and her family.

15. L.M. Montgomery was declared to be a person of national historic significance in 1943.