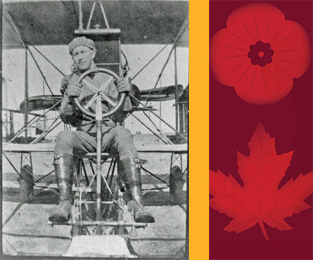 William Sharpe was a pioneer Canadian military aviator. At a time when flight was still in its infancy, Sharpe was one of three personnel appointed to the newly established Canadian Aviation Corps in 1914, Canada’s early attempt to organize an air force to serve in Europe.

Appointed the rank of lieutenant, he was sent to Europe. On February 4, 1915, while on a solo flight training exercise with Britain’s Royal Flying Corps in Shoreham, England, Lt. Sharpe’s biplane crashed killing the young pilot. He thereby became one of Canada’s first military airmen casualties of the First World War.

His courage and sacrifice were honoured with a Memorial Cross and through the 661 Lt. W.F. Sharpe Squadron of the Royal Canadian Air Cadets located in Prescott, his hometown.