A Guide to Fort Wellington

Built in 1838-39, Fort Wellington today depicts its appearance and life in 1846 when the Royal Canadian Rifle Regiment (RCRR) was stationed here. The RCRR had been established a few years earlier for service in Canada and had been granted special privileges to discourage desertion. Its members enjoyed a better life style than the average British soldier and a greater percentage than usual in the British army were allowed to marry. Along with a higher rate of pay than most regiments, riflemen in the RCRR, were allowed to find work in the community in which they were stationed. Wives of soldiers could make money washing clothes or working as domestic servants in the town of Prescott. Children were allowed to live with their parents until the age of 14 when they were required to leave the barracks to make their own way in the world.

Fort Wellington has survived virtually intact from the days when the RCRR was stationed there. Two buildings that once stood within the ramparts of Fort Wellington are, however, now missing: the guardhouse, to the east of the main gates, and the cookhouse, between the officer's quarters and the latrine. Sentries rested in the guardhouse between shifts and the cookhouse was used for preparing the soldiers' meals. 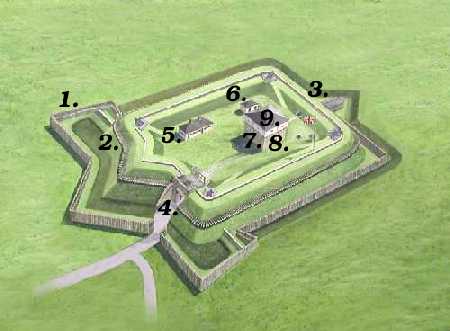 Please click on a number to learn more about that feature of Fort Wellington.
© Parks Canada 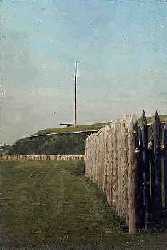 The first line of defence for Fort Wellington is a 2.8 metre [9.2'] high wooden palisade intended to slow an enemy advance on the main fortification. On the north side of the fort, within the palisade, there are additional stretches of wooden fencing, intended to provide protection for defenders firing on enemy troops who had broken through the palisade. An enemy's attempt to approach the fort on the south, east and west sides was made more difficult by dry ditches dug along the edge of the palisade.

The ramparts were the principal line of defence for the fort. Made of earth and rubble piled on a 45 degree angle and covered with sod to prevent erosion, they are 18.3 metres {60'] thick at the base. Just below the crest of the ramparts there is a series of posts set horizontally into the earth, projecting out from the ramparts to discourage an enemy's effort to scale the walls. This defensive work is known as fraising.

The ramparts were not just a barrier to enemy attack, they were also an elevated platform for cannons. Two 24-pounder cannons are set on the southern ramparts overlooking the river and the American town of Ogdensburg on the far shore. A pair of 12-pounder cannons are set on the northern ramparts to fire upon troops advancing on the fort from that direction. 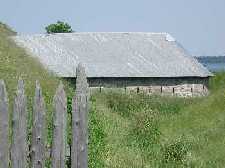 An enemy who managed to reach the southern dry ditch would have met a volley of fire from the caponnière, joined to the fort by a passage under the ramparts. The caponnière is made of stone thick enough to stop small-calibre cannon balls, with a ceiling of heavy timbers covered with earth to make it bomb proof. 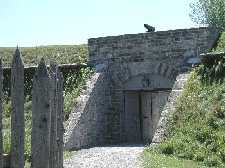 Consisting of two pairs of large wooden doors mounted in a stone archway, the main gates are the only entrance to the fort. Being the most vulnerable part of the fortifications they were situated in the north wall because an attack was likely to come from the direction of the river. The carronade, a small piece of artillery mounted over the gates, provided extra protection from an enemy attack. 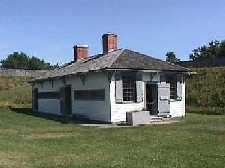 An officer named Lieutenant William Henry Sharpe of the Royal Canadian Rifle Regiment occupied this building in 1846, and it is furnished to represent his living quarters It contains three rooms, the northernmost being the bedroom; the centre room, the kitchen; and the southern room, the dining room and office. A soldier called a batman acted as the officer's servant, cleaning his quarters, caring for his uniforms and cooking some of his meals. Sharpe's quarters were well furnished and comfortable. Because an officer moved often from post to post, much of his furniture was designed to be easily transportable. The dresser in the bedroom is an example of this type of furniture known as "campaign furniture'. Made in two sections, it is equipped with handles at each end to make it easier to carry. 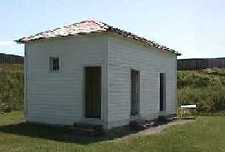 The Latrine. Please click on the photo to see reproductions of artifacts found during an excavation.
©Parks Canada

This clapboard building was constructed in 1838-39. The latrine illustrates the strict division between officers and the other occupants of the fort for it is divided into three separate compartments, each with its own entrance. The officers' privy was situated at the northernmost section of the building, the centre room was for the women and children living at the fort and the southern room was the enlisted men's privy. In contrast to the other two rooms, the enlisted men's privy offered no privacy to its users.

In 1990, an archaeological excavation of the latrine uncovered several thousand artifacts belonging to the members of the Royal Canadian Rifle Regiment and their families. Although the latrine was not intended as a place to throw garbage, it appears to have been used for this purpose by the inhabitants of the fort. Many of the objects found in the latrine were regular issue items distributed by the British Army such as leather boots, but many more were items of personal use, medicine, toiletries, ceramics, and children's toys that might have been bought from merchants in Prescott. 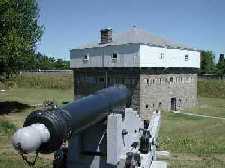 A massive stone structure, the three storey blockhouse was a fort within the fort. Its walls are almost a metre thick (3'). The roof structure is filled with layers of cedar logs and dirt to protect against mortar shells. Loop-holes cut into the walls allowed defenders to fire on enemy soldiers who had managed to breach the ramparts. To deal with troops who had reached the walls of the blockhouse itself, there was a gallery on the third floor, projecting out from the building, with trap doors set in the floor to enable defenders to fire directly down on the enemy. In the event of an attack, a well-supplied garrison would have been secure within the blockhouse until the arrival of reinforcements from nearby Fort Henry in Kingston.

The ground floor was the location for a number of storage rooms, containing the equipment and food supplies needed in case of an attack on the fort. The most interesting room on the ground floor is the powder magazine. Because it held some hundreds of barrels of gunpowder, enough to destroy the blockhouse in the event of an explosion, many precautions were taken in its construction. The use of iron, from which a spark might have been struck, was avoided. Door fittings were of brass. The ventilation shafts and the doors were sheathed in copper. Iron nails were used to lay the floor boards but were elaborately concealed. Another precaution that was taken was the zig-zag construction of the ventilation shafts to avoid the danger of an enemy bullet entering the powder magazine through that route. 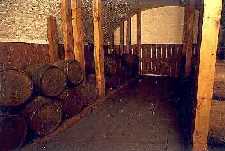 Because the making of cartridges was a hazardous activity it was done, one barrel of gunpowder at a time, in an adjoining room, called the shifting room. As an additional safety measure, the shifting room was separated from the powder magazine by two heavy wooden doors sheathed in copper.

The barracks housed the men of the garrison and their wives and children. In contrast to officers, they lived under conditions which were crowded and unsanitary. In 1846, at least 65 men, 26 women and 36 children lived on the second and third floors of the blockhouse. The space on the second floor is divided with curtains, providing privacy for married couples. The third floor was for unmarried men or men who had not brought their families with them.

From the third floor, a number of low doorways provide access to the overhanging gallery, mentioned earlier as part of the defences of the blockhouse. This floor currently houses an extensive exhibit that traces the history of the fort.