Alex Laudadio studies Earth Sciences at Carleton University, so she should know all about processes that form and shape our dynamic planet. At Fort St. Joseph she’s putting her communication skills and school smarts to good use—explaining the origin of puddingstone to visitors. 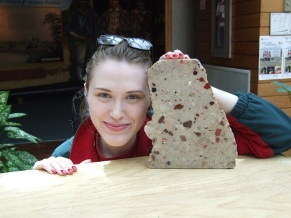 Alex with a puddingstone
© Parks Canada

So, we asked her “what is puddingstone”?

It’s a conglomerate. A sedimentary rock made of a fine-grained quartzite, resembling cement, with pieces of rounded pebbles suspended in it. The pebbles in the puddingstone found on St. Joseph Island are red or brown jasper, and look like currants and raisins suspended in a Christmas pudding. They’re just not as tasty. The rock is millions of years old and was deposited along the northwestern parts of Lake Huron by glaciers.

Did you know? A cairn marking the location of the last spike for the Canadian Pacific Railway near Revelstoke, British Columbia, includes rocks from across Canada. The stone sent from Ontario was a puddingstone from Bruce Mines.

Originally, from Sault Ste. Marie, Ontario, Alex will be entering her fourth year of university in the Fall. She likes nature and chose to work for Parks Canada as a summer student this year to gain experience working with the government.