The mackinaw coat: a Canadian invention

The date is November 20, 1811. Captain Charles Roberts, Commander of the British troops at Fort St. Joseph, is sitting by candlelight writing a letter to Captain Evans, Adjutant General in Quebec, to explain why he is about to break the rules.

The letter reads: “All hopes having now ceased of the arrival of the schooner Hunter or any other vessel from Amherstburg with the clothing of the detachment, I am this day obtaining, upon my requisition to the storekeeper of the Indian Department, a consignment of heavy blankets, for the purpose of making them great coats, a measure the severity of the climate strongly demands and one, I trust, the commander of the forces will not disapprove of when he is informed that not a remnant remains of the coats served out to them in the year 1807 and that they have received none since.”

That same day, Captain Roberts steps into John Askin Jr.'s store. John Askin, a Métis and keeper of the King's stores, welcomes the Captain from behind the counter. "Good morning, Captain Roberts. Looks like the freezing temperatures will keep the Hunter from bringing us any more supplies."

"I have come to the same conclusion, John", replies Roberts. "Consequently, I have a business proposal to make to you." 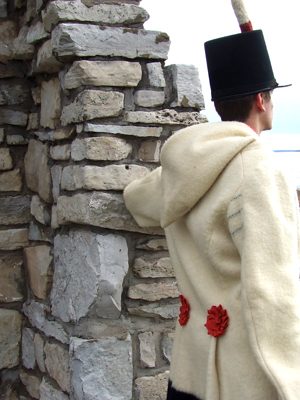 "You and I know how cold the winters can get here on the western frontier," began Captain Roberts. "Since we did not obtain the shipment of greatcoats for my men, I would like to have forty coats made from point blankets. The last thing we need with war looming ahead is for our troops to take ill on the wind-swept hill of Fort St. Joseph."

"The 3-1/2 point blankets should make fine winter coats. I will ask my wife, Madelaine, and the other native women to sew the coats for your men," replied John. "Give me a fortnight and you will have your coats."

John Askin Jr. (and the good women of Fort St. Joseph) did even better. Before two weeks had past, they presented Captain Roberts and his men with 40 warm woolen coats. The following summer Roberts with the help of Askins and their Aboriginal allies occupied American Fort Michilimackinac in Michigan at the start of the War of 1812.

The coming winter, Roberts again ordered blankets to be made into coats. The short, double-breasted style of coat became known as a Mackinaw.