Spirits with stories to tell 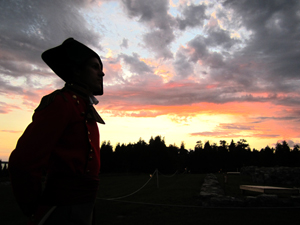 The Fort St. Joseph Ghost Walk, held the third weekend in August, is a unique experience giving participants a glimpse into the lives of the inhabitants of the fort and settlement, which was located at the southern-most point of St. Joseph Island where the St. Marys River widens into the North Channel and Lake Huron. This rendez-vous with the spirits is staged among the ruins of the fort, and is made possible through the tireless efforts and collaboration of Parks Canada’s staff and more than two dozen volunteers.

As the sun sets, the fort’s ruins seem to grow back into their former glory – the most westerly outpost – a complex of military, domestic and commercial life, both Aboriginal and European. Actors become spirits as they slip into historic costumes and step before their audiences.

Amid candle-lit pathways Captain Charles Roberts outlines how he helped build a commercial and military alliance among the First Nations, Métis and British, which helped captured Fort Mackinac as part of the first offensive military action of the War of 1812.

To the sounds of bagpipes and Aboriginal drums, Chief Little Crow tells visitors the story of how he adopted Lieutenant Landmann as his little brother, giving him the sacred Ojibway name of Manitouwiwin (Little Spirit). 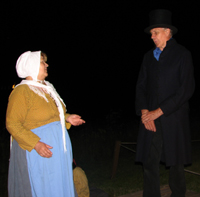 With the Milky Way shining above to guide their footsteps, guests listen to trader, John Askin, and his wife Madelaine tell of their concerns about the threat of war with their American neighbours to the south. Afterall, the border lies undefended while Britain is engaged in the Napoleonic War in Europe.

While the moon continues to throw its ghostly hue, it is easy to imagine yourself standing in a remote outpost community on the verge of war. But when the sun rises, the stage will once again become just “a pile of rocks” and the spirits be transformed into passionate staff and volunteers eager to share a bit of Canadian history with visitors. Until next year, that is!