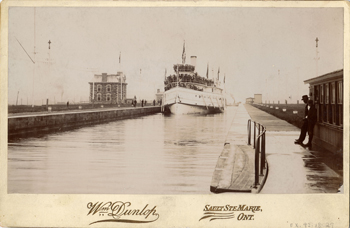 One hundred years ago the Sault Ste. Marie Canal experienced its peak for cargo shipping. In 1913, 8285 vessels carrying a staggering 42.7 million tons of freight pass through the Canal. The year also marked a shift in the type of boat traffic using the lock.

The Sault Ste. Marie Canal completed an all-Canadian waterway from Lake Superior to the Atlantic Ocean. When it opened in 1895, the Sault Canal was not only the longest lock in the world, but also the first to operate using electricity. That first year of operation under a million tons of freight passed through the new Canadian lock. Each successive year more iron ore, wheat and lumber headed east, while coal and manufactured goods went west. 82% of the cargo passing through the Canadian lock system came through Sault Ste. Marie!

The main reason for the peak in traffic and freight through the Canadian lock in 1913 was the construction of the new Davis lock on the American side of the St. Mary’s River. When the longer, wider and deeper lock opened in 1914, traffic on the Canadian side declined considerably. New vessels being constructed for the Great Lakes fleet were approaching 60-foot widths, taxing the capacity of the Sault Ste. Marie Canal. However, the Davis lock had no trouble accommodating these, nor the even larger vessels that would soon follow. By 1915, 63.55 million tones of freight came through the American lock system, while only 7.8 million tons passed on the Canadian side. 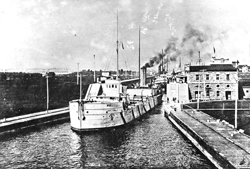 Passenger steamboat and freighter in the lock
© Parks Canada

Despite the decline in larger vessels, lock statistics indicate that smaller bulk freighters and package carriers, known as "canallers", favoured the Canadian lock, as did passenger ships. During the first half of the 20th century, Great Lakes cruises were extremely popular and a fleet of Canadian passenger vessels including the Assiniboia, the Huronic and the Noronic, plied the waterways carrying tourists on summer sightseeing voyages. The passenger boats were a perfect size for the Canadian lock, and fewer commercial vessels meant a speedier lockage. In 1945, 39,247 passengers locked through the Sault Ste. Marie Canal, while only 6,797 passed through the American lock system.

Today, the Canadian lock remains a favourite for recreational boaters. The Sault Ste. Marie Canal is now a national historic site managed by Parks Canada. From mid-May to mid-October the lock, operated by the city of Sault Ste. Marie, continues to serve as a vital passage between Lake Superior and Lake Huron. Watching a boat lock through is a highlight for many of Sault Ste. Marie’s visitors.