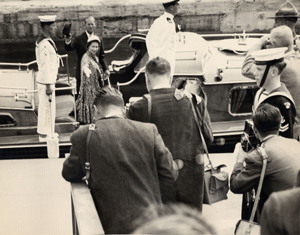 2012 marks Queen Elizabeth II's Diamond Jubilee, celebrating her 60th year on the throne. In 1959, six years after her coronation, the Queen and Prince Philip travelled to Canada for the inauguration of the St. Lawrence Seaway.

Their 45-day, cross country tour included visits to all 10 provinces, both territories, and four Great Lakes in an attempt to bring the royals to parts of Canada never before visited by monarchy. One of the stops was right here in Sault Ste. Marie. It was the first and only time the city was visited by a reigning sovereign. 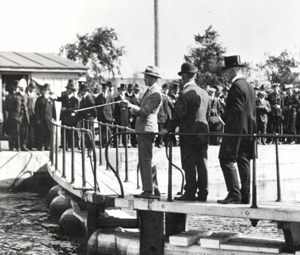 Prince of Wales inspecting the Sault Canal in 1919
© Parks Canada

The couple arrived on July 8, 1959 on the Royal Yacht Britannia and docked in the St. Mary's River offshore from Clergue Park. The Queen's visit to Sault Ste. Marie marked the official opening of the city as an ocean port and included a walkabout in Bellevue Park, a parade through city streets, a luncheon at the Windsor Park Hotel, a tour of Algoma Steel and culminated in a passage through the historic Sault Ste. Marie Canal. The canal formed part of the St. Lawrence Seaway from 1959 until 1979 when it was transferred to Parks Canada. The Queen was not the first time the site had hosted royalty. The Prince of Wales, later to become Edward VIII, visited in 1919 on a royal tour that crossed the country by rail.

The Queen and Prince Philip arrived at the canal grounds at four o'clock in the afternoon and after conversing with their RCMP escorts, descended a special walkway to the royal barge which was moored along the pier. As the couple passed through the lock on their way to the waiting yacht to continue their journey, they waved to cheering crowds lining both sides of the canal. Although the whirlwind visit lasted only four hours, for the thousands of Saultites who came out to view their Queen, it was a memory which would last a lifetime.