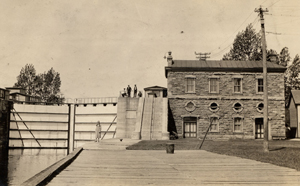 A few small steps for the Powerhouse will mean a giant leap forward for the heritage conservation of the Sault Ste. Marie Canal National Historic Site of Canada. Work is underway for the design of structural steel repairs in the Powerhouse building, one of five historic buildings onsite made of red sandstone excavated from the canal during its construction. This work is the first step in efforts to conserve a classified Federal Heritage Buildings Review Office (FHBRO) structure. A classified building is deemed to have the highest heritage significance and the Powerhouse certainly fits this description.

The Powerhouse was built in 1894 and housed the equipment which allowed the lock to function using electricity, a significant technological achievement. The Sault Ste. Marie Canal had the distinction of being the first lock in the world to operate using electricity! The Powerhouse’s unique construction in a hillside meant water could be drawn from above the upper lock gates and routed downhill through a long underground pipe to feed two turbines on the ground floor of the building. A series of pulleys and belts transferred the energy up to the second floor where generators produced the electricity needed to operate the lock gates and valves, as well as, both exterior and interior lighting. The Powerhouse also contained the unwatering pumps which were used to empty the lock of water in case repairs were required. The original equipment associated with the unwatering process still remains intact today. 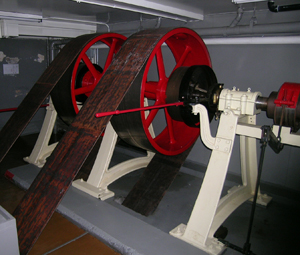 The unwatering pumps, which are still used today
© Parks Canada

In addition to the structural repairs on the Powerhouse, work has begun on demolishing the old public washrooms which were a later addition to the building. The demolition is required to enable the building to be restored to its original layout and aid in long-term conservation. Future plans could even involve small scale electrical generation as part of showcasing this important historical structure. Reviving this building will better enable Parks Canada staff to protect and present this aspect of the site. It’s all part of Parks Canada’s vision to connect the hearts and minds of our visitors with the essence of the Sault Ste. Marie Canal National Historic Site of Canada.