We will remember them…

Canada’s participation in the First World War (1914-1918) and the Second World War (1939-1945) touched every community in this country. Parks Canada invites Canadians to join us in commemorating individuals from all walks of life who made unique contributions to the war effort. During these global conflicts, civilians and those in the armed forces played a crucial role in protecting and building their communities and thus Canada as a whole. Get to know the remarkable stories of these Hometown Heroes, honour their memory and express your gratitude for their service by visiting Parks Canada’s National Historic Sites, National Parks, and National Marine Conservation Areas.

David Kyle was born in 1885 in Dalry Ayrshire, Scotland and moved to Sault Ste. Marie in 1910 at the age of 25. He worked at Algoma Steel from 1910 until the beginning of the First World War where he served as a captain. After the war he returned to Sault Ste. Marie to become the Vice President of Algoma Steel and president of the Great War Veterans Association. In 1917, he received the military cross which can be awarded to commissioned officers with the rank of captain or below for distinguished or meritorious service in battle. He died at the age of 35 (1920) from Influenza. During his funeral men and machinery were stopped for ten minutes out of respect for Kyle. 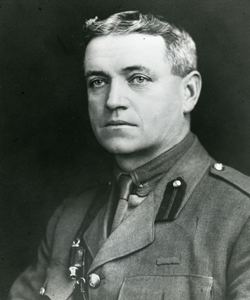 Sydney Penhorwood was born in Wales in 1872 and moved to Canada with his father, where he became a location engineer at the Sault Ste. Marie Canal. At only 18 years old, Penhorwood joined the military and became part of the Sault Mountain Battery. Even after Penhorwood graduated from school and began working as an engineer, he remained actively involved with Sault Ste. Marie militia. Penhorwood organized the 51st Regiment in 1911, and was appointed Lieutenant Colonel of the regiment in 1913. At the beginning of the war, Lt. Col. S.L. Penhorwood remained in Sault Ste. Marie to command the 51st Regiment Soo Rifles, who had been given the task of protecting the Sault Ste. Marie Canal. Eventually in 1915 Penhorwood did travel overseas, but not to fight on the front lines. Instead, Penhorwood was charged with a different task: he was appointed Assistant Director of Timber Operations for the Canadian Forestry Battalion in Great Britain. During his time as the Assistant Director, Penhorwood became close friends with King George V, who was very impressed with Penhorwood’s efficient manner of completing his work. Penhorwood supervised the Canadian Forestry Corps until the end of the war. After the war, Penhorwood was transferred to the reserve. For his services during the war, Sydney Penhorwood received the Order of the British Empire in 1917, as well as the Royal Victorian Order in 1919. 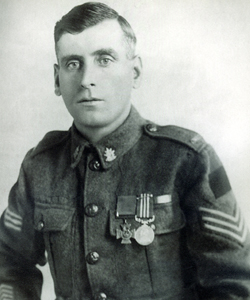 William Merrifield was born in Brentwood, Essex, England on October 9, 1890. Merrifield came over to Canada at the age of 12 with his father. They moved from England to Sudbury, onto Ottawa and then eventually settled in Sault Ste. Marie. In 1914, Merrifield enlisted with the Canadian army to fight in the Great War. Merrifield fought from 1914-1919, and received the highest honour in the British and Commonwealth countries – the Victoria Cross. The London Gazette wrote in 1919 that Merrifield received the Victoria Cross for “most conspicuous bravery and devotion to duty during the attack near Abancourt on the 1st October, 1918.” After the war, Merrifield came back to Sault Ste. Marie, where he met and married his wife. He lived there with his wife and four children until his death in 1943. After returning to Sault Ste. Marie in 1919, Merrifield worked as an engineer for the Algoma Central Railway. The Algoma Central Railway Engine House is a National Historic Site of Canada, with a plaque in Sault Ste. Marie. 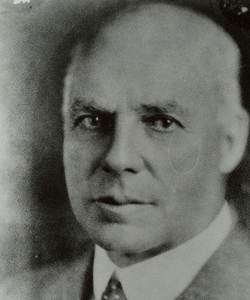 John Walter LeBreton Ross, was born in Ottawa in 1866. He began work in 1883 at the age of seventeen with the Department of Railways and Canals and continued his work with canals which led him to receive the position of Superintending Engineer at the Sault Ste. Marie Canal in 1907. He held the position of Superintendent at the Canal for the longest period of time in the SSM Canal’s history from 1907 to 1936. During his time in the Sault he was the president of the Horticultural Society as well as the Historical Society and his home was well known as a centre of social activity. At the time LeBreton Ross began as Superintending Engineer, the Sault Ship Canal was the busiest canal system in the world. During World War 1, the canal was guarded by the 51st Soo Rifles. After the declaration of the war, LeBreton Ross recognized the need for vigilance and for appropriate procedures to protect his facility. By December of 1914, 140 officers were stationed at the canal. Throughout his time at the canal he demonstrated his passion for the canal and surrounding area. After retiring in 1936, LeBreton Ross returned to Ottawa where he remained until his death in 1946.