King and the British Empire 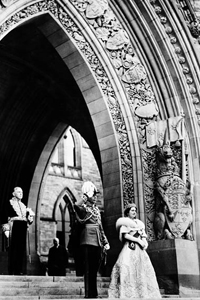 In his early years in office King had to devote considerable energy to rebuilding the unity of the Liberal party which had fragmented over the conscription issue. The success of his efforts gave him the strong base of support that he needed to stay in office for so many years. Another major accomplishment in the 1920s was to bring about a significant shift in Canada's relations with Great Britain. Like Laurier, King supported the Empire but believed that Canada should be in control of its own affairs. His resistance to outside interference finally resulted in Britain's recognition that Canada was autonomous in domestic and external affairs while remaining as a community within the British Empire. The picture that King had in his mind of what he wanted to achieve as prime minister closely resembled what his predecessor, Laurier, had envisioned: a united, autonomous and prosperous country.