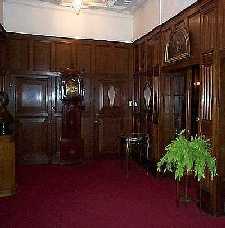 Although Mackenzie King had frequently visited Laurier House, he was upset by its appearance when he became its new owner: "I confess it is a bare bleak place ... not at all to my liking in any particular [and] will require to be completely gone over. I have little or no sentiment about it." He was particularly concerned that the house was in a bad state of repair, requiring, at the least, a new heating system, new plumbing and a new roof, expenses that he was unable to afford. Political friends came to his rescue, determined to ensure that their party's leader was housed in a manner appropriate to his office. With their support, King undertook a major renovation of the house to repair it and upgrade its facilities, but also with the goal of recreating for himself the surroundings of what he called an "Old Country baronial hall" within which to live.

The generosity of the donors extended beyond renovating the house. Before inheriting Laurier House, King had led a bachelor's life in an Ottawa apartment building. He possessed furniture but not of the quality or quantity to furnish his new home. By the time he was ready to move into his new home, King was overwhelmed by gifts: antique furniture, paintings, china, cutlery - in fact everything that he needed to lead a comfortable life at Laurier House. The donors also ensured that he would be free of worries over the cost of running such a big house. Money was raised for a trust fund, the interest from which was sufficient to maintain Laurier House without King's having to spend his own money. 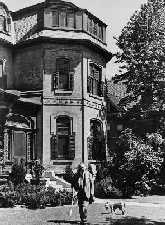 The anxiety that King felt when he inherited Laurier House gave way to a deep sense of contentment. He came to view it as a place of refuge from the storms of political life and delighted in guiding visitors from room to room pointing out features or objects of which he was particularly proud. And he did not fail to recognise the political advantage of living in the former home of Sir Wilfrid Laurier whose reputation for leadership and integrity was still fresh in people's minds.

King's style of life at Laurier House was in sharp contrast to that of the Lauriers. King was a bachelor with few close relatives. He was also a solitary man who worked long hours and resented social events as a waste of time. When he entertained, it was usually for political reasons with invitations to political colleagues, diplomats and dignitaries for formal luncheons or dinners.

King kept a detailed record of visitors to Laurier House and distinguished names like Winston Churchill, Franklin Delano Roosevelt, Charles de Gaulle, and King George VI and Queen Elizabeth appear in his guest book . He took his responsibilities as a host very seriously and ensured that his guests were served well prepared meals accompanied by fine wines. He was known as an amusing conversationalist, but he found entertaining an exhausting duty and undertook it only out of necessity.

Even though King lived alone at Laurier House, entertaining infrequently and rarely inviting anyone to stay overnight, he needed a staff of servants to ensure the smooth running of the house. Extensive records survive of the servants who worked for King, and they included a cook, a kitchen maid, two parlour maids, a butler/valet and a chauffeur, all of whom lived in. The records reveal, however, considerable turnover throughout the whole period of King's life in the house. He seems never to have gained the skills necessary to manage staff, nor did his constant demands and exacting standards endear him to his employees. 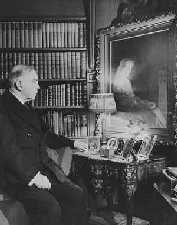 King's life in Laurier House centred on his third storey study. Much more than Laurier, King chose to conduct the nation's business from home, rather than from his office on Parliament Hill. His daily routine when Parliament was in session was to work in his study in the morning before going to his Parliamentary office after lunch. After his evening meal he retired to the study where he continued to work until midnight. If Parliament was not in session, his work day was spent mainly at home. Such a routine meant that part of the third floor of Laurier House was set aside as offices for his secretary and clerical staff and for the storage of his government papers.

More than any other room in Laurier House the study reveals King's interests and personality. King invited few people to visit him there because it was his retreat, a private place for work, study and reflection. The walls were lined with his books: poetry, biographies, histories and philosophy for the most part. The piano, treasured because it had belonged to his mother, occupied a large space in the room. King was fond of the large refectory table that he had been given when the house was being furnished, liking the academic feel that it give the room. Above all, the study was dominated by a portrait of King's mother, Isabel. King kept a small lamp continually lit and a vase of fresh flowers in front of the painting on a small table, which also held a small decorative box containing his mother's wedding ring and a lock of her hair. 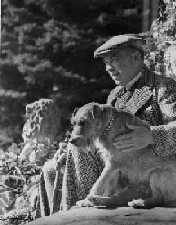 When he retired from politics in the summer of 1948 King was 73 years old and worn out by the cares of the prime ministership that he had held for so many years. In retirement he spent increasing amounts of time at his Kingsmere estate which he loved even more dearly than Laurier House. His plan was to organise his vast collection of political papers and write his memoirs. He was also interested in the work that was going on in Kitchener to reconstruct his boyhood home, Woodside. But King's retirement was brief. He died on 22 July 1950 at Kingsmere.