Henry Norman Bethune's story started in Gravenhurst, Ontario, a small lumbering town 100 miles north of Toronto. His father, Malcolm Nicolson Bethune (1857-1932), came from an old Canadian family who traced its ancestry to Scottish lairds and French Huguenots; his father, Norman's grandfather, had been one of the founding doctors of the medical faculty of Trinity College, Toronto. In 1887, Malcolm married Elizabeth Ann Goodwin (1852-1948), the daughter of an English "wood turner," or skilled carpenter. After his graduation from Knox Theological College in Toronto, they moved with their infant daughter, Janet Louise, to Gravenhurst, where Malcolm was ordained at Knox Presbyterian Church. Henry Norman was born in the manse, March 4th, 1890. Their third child, Malcolm Goodwin, was born in 1892.

From an early age Norman was curious, independent and stubborn; it was often difficult for him to stay within the confines set by his parents. When he was six, he once wandered away from his home in Toronto to explore the city, returning on his own several hours later. His father's frequent transfers may have intensified his wanderlust; the Bethunes left Gravenhurst when he was three and moved six more times before he was fourteen.

In 1911, Norman interrupted his studies in biology at the University of Toronto to work at Frontier College, setting up classes for immigrant workers in a bush lumber camp in northern Ontario. At the outbreak of World War I in 1914, he enlisted in the Royal Canadian Army Medical Corps. While serving as a stretcher bearer, he was wounded at Ypres, Belgium, and returned home to finish his medical degree. In 1917, he re-enlisted, this time in the Royal Navy.

After demobilization, he remained in England engaged in post-graduate studies. In 1923, he married Frances Campbell Penney, the daughter of a prominent Edinburgh court accountant. Because of their great temperamental differences, theirs was to be a stormy relationship. They moved to Detroit, Michigan, where Bethune set up his first, and only, private practice. He was 34. Two years later, he contracted tuberculosis.

Following treatment at the Calydor Sanatorium in Gravenhurst, he was admitted to the Trudeau Sanatorium in Saranac Lake, New York State. Isolated by the stringent rules and the enforced rest, divorced by Frances, everything seemed to be merely a "dance of death." When he discovered a description of artificial pneumothorax, a risky operation in which air is pumped into the diseased lung cavity, he demanded the treatment. Within a month, he recovered and ended his year-long stay in the sanatorium. Henceforth, he decided, he would dedicate himself to the eradication of tuberculosis.

Early in 1928, Bethune moved to Montreal. For five years, he was the First Surgical Assistant to Dr. Edward Archibald, Canada's pioneering thoracic (chest) surgeon, at the Royal Victoria Hospital. In 1933, because of personal and professional frictions with some of the other doctors, he left to head up the Department of Thoracic Surgery at the Sacré Coeur Hospital in Cartierville, ten miles north of Montreal.

Although Sacré Coeur was a smaller, less prestigious hospital, he was twice elected to the Executive Committee of the American Association for Thoracic Surgery while he was there.

In addition to practical surgery, Bethune wrote numerous articles for medical journals introducing new surgical techniques and outlining improvements based on his own research. He designed many new instruments and constantly experimented to improve them. One of them, the "Bethune Rib Shears," is still manufactured.

Professionally, Bethune gained international recognition as a skillful, dedicated surgeon. In 1929, he remarried Frances, but frictions between them led to divorce in 1933. His friends during these years were mainly creative people, and Bethune himself was a talented amateur artist. His perceptive wit could transform mundane events, but he often took what he called "my irritating delight in shocking the timid." Publicly, he could be seen driving his jaunty yellow roadster, wearing unconventional clothes. One friend remembers that he was like "some meteor passing."

Nevertheless Bethune could not be unaffected by the Depression; one-third of the population of Montreal was on direct relief. As he became aware of the effect of the Depression on the health of the poor, Bethune came to feel that medicine must concern itself with the social causes of disease as well as the medical symptoms. In 1935, he set up a free clinic for the unemployed. He became convinced that only governmental regulation of private medical practice would ensure treatment of all, regardless of financial status. In 1936, he organized the Montreal Group for the Security of the People's Health, an advocacy group for public health care. That same year he joined the Communist Party.

During the summer of 1936, the Spanish Civil War broke out. In September, 1936, Bethune volunteered to go to Spain under the auspices of The Committee to Aid Spanish Democracy, a Canadian agency.

Shortly after arriving in Madrid, Bethune conceived of a mobile blood transfusion service that could collect blood from donors in the cities and transport it wherever it was needed most. Within a month, the unit was functioning. Although Bethune later referred to it as a "glorified milk delivery service," his mobile blood bank has been called the greatest innovation in military medicine of the Spanish Civil War.

In February 1937, Bethune set off with his unit to the besieged city of Malaga on the south coast of Spain. Before he could reach it, the city fell. On the road, he encountered more than 40,000 refugees fleeing to Almeria, 100 miles away, carrying children and possessions. Those who could go no farther lay down beside the road to die. For three days, Bethune and his unit ferried the most desperate to the safety of Almeria. Then, Almeria too was bombed. The deliberate bombing of civilian refugees was something that Bethune could never forget. "Spain," he later wrote to Frances, "is a scar on my heart."

By May 1937, the military medical forces in Republican Spain were organized into a bureaucracy within which Bethune felt he could no longer function. Angry and exhausted, he returned to Canada, but set off immediately on a cross-country speaking tour to raise money for the work in Spain. 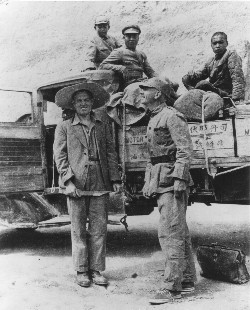 Dr. Richard Brown, left, a Canadian missionary, guided Bethune to Yenan in April 1938 and beyond in May

That summer however, Japanese forces escalated an earlier invasion of China into the Second Sino-Japanese War.

On January 8, 1938, Bethune left Canada for the last time, accompanied by Jean Ewen, a Canadian nurse, and $5000 worth of medical supplies. He travelled to Hankow, where Communist representative Chou En-lai offered him an escort to the Communist headquarters at Yenan, some 500 miles northwest. 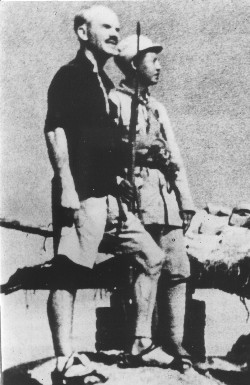 Bethune on guard patrol with the Eighth Route Army, circa 1938

The night he arrived he was summoned by Mao Zedong, Chairman of the Chinese Communist Party. Mao invited him to stay and supervise the Eighth Route Army Border Hospital. Within a month, Bethune decided that he would be more effective at the front, where he could treat the wounded immediately.

On May 1, he left Yenan for the mountain ranges of the isolated Chin-Ch'a-Chi Border Region, 200 miles north, where the fighting was the fiercest. He was appalled by the unsanitary conditions he found there. The wounded, brought back from the battle days or weeks before, lay huddled under thin blankets, their dressings unchanged, their wounds gangrenous. For many, amputation was the only treatment. 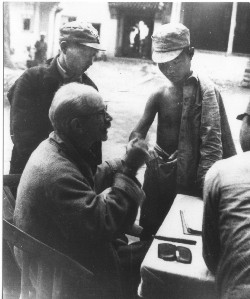 Bethune tending the sick and injured, China, circa 1938.

In this area of 13,000,000 people, Bethune was one of the few qualified doctors. Realizing that those he trained could train others in turn, he threw his energies into teaching. He set up classes in the fundamentals of first aid, sanitation, and basic surgery. He wrote and illustrated manuals, which were translated and mimeographed for distribution; his goal was to graduate doctors in one year, nurses in six months. 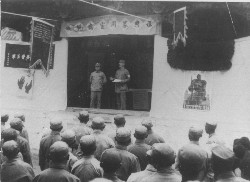 Bethune speaking at the opening of his Model Hospital at Sung-yen K'ou, September 15, 1938.

Bethune established a hospital at the front for teaching and treatment.. For two months, he planned and supervised the construction of a "Model Hospital," which opened with great ceremony on September 15, 1938. It was destroyed by enemy action within three weeks. 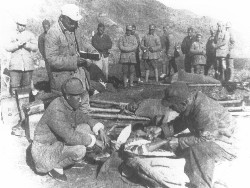 Bethune teaching while operating on injured Chinese in the field, circa 1939.

Bethune then realized that in the guerrilla-war zone of China all medical facilities had to be mobile. In the next year, he travelled more than 3,000 miles. He devised a portable operating theatre that could be carried on two mules. He operated at a prodigious rate; once he operated on 115 cases in 69 hours without stopping even when under heavy artillery fire.

Bethune's original tomb at Nan Kuang, the "southern pass" of Chu-ch'eng. He is now interred in the Cemetery of Martyrs in Shijiazhuang.

Near the end of October, while operating on a wounded soldier, Bethune accidentally cut his finger because there were no rubber gloves. At the time, his wound did not seem important -– it had happened before without mishap. But this time infection set in, a virulent form of blood poisoning. Norman Bethune died in the early hours of November 12, 1939.

When Chairman Mao heard of his death, he wrote "In Memory of Norman Bethune." Now one of Mao's most famous essays, it is required reading in China. 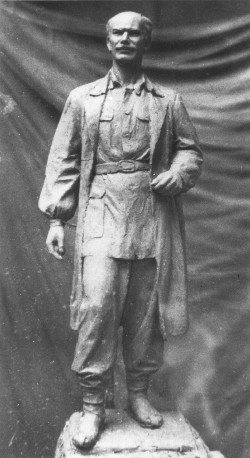 Many heroic statues of the extraordinary foreigner "Baiqiuen" (Bethune) have been erected throughout China.

Throughout China, memorials have been erected to extol Bethune's example. The Model Hospital has been rebuilt. His bomb shelter in the side of a hill, the disused temple in which he operated, and houses in which he lived have all been restored as museums. In 1950, his body was moved to the Cemetery of Martyrs in Shijiazhuang. Across the street, beside the Bethune Museum, is the 800 bed Norman Bethune International Peace Hospital.

In Canada, the former Presbyterian Church manse in Gravenhurst, his birthplace, was acquired by the Government of Canada in 1973, and officially opened in 1976 as a Canadian memorial.