This is a short story about how Téetsenetúé was used by our forefathers, and how it is used today. Even though Kwets’éhtɫ’á is a perfect place to set nets the amount of fish decrease as colder weather comes. Sometimes people would set their nets at Ededude, but traveling such a distance gets tiresome so they would set up camp at Téetsenetúé. There they would set their nets and catch fish all winter long. Sometimes people would live on the west side of Grizzly Bear Mountain at Cloud Bay where they would fish while they were trapping. Here also the catch of fish would decrease as colder weather came so the people would set their nets at Téetsenetúé. This movement between Cloud Bay and Téetsenetúé created the trail which exists between those two bodies of water today. From there they would trap in direction of Kwets’éhtɫ’á, ətsík’ə to the top of Grizzly Bear Mountain, and around places like Betáhdə, Whayíikál and Ɂehalacho. 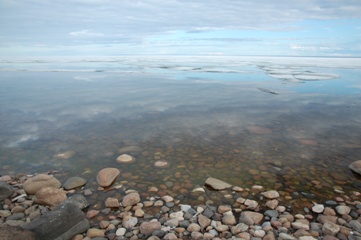 At Téetsenetúé people would catch lots of lake trout and whitefish, so people lived off the lake almost all winter long. On Grizzly Bear Mountain this was the only fish lake people would use to get their winter fish supply from. There were also moose in the area and good trapping, so in the olden days people would always hunt, trap and fish at Téetsenetúé.

Maybe one of these days our children will read this story and when they are at Téetsenetúé they could live off the lake like our forefathers did.