According to George Kodakin, this next story took place at the tip of Grizzly Bear Mountain at a place called Ɂehdarede’le’ (Tetso 1991). 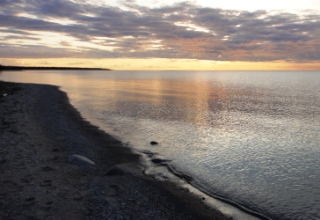 The name story for Grizzly Bear Mountain comes from a human shaman’s confrontation with a large grizzly bear that possesses medicine power. Na’ka’s encounters with a grizzly bear came about as a result of Dene hunting activities, where the rash behaviour of a young man came back years later on an older but “wiser” hunter. Although a talking bear that can transport itself through space and time stretches the “western” bounds of ursine biology, it is with in keeping of Dene traditions that the hunters with powers can talk with animals. Bear stories frequently carry multiple meanings. Human/bear transformations are common. It is said that it is often hard to tell when a bear is a man. A fight with a medicine bear may actually be a duel with another shaman. As with Willaim Sewi's earlier story about the Twin Cones, the narrative carries with it a prescription for Dene behaviour, in this instance you do not kill large bears on Grizzly Bear Mountain. To see signs of, or to see a grizzly bear on Grizzly Bear Mountain is considered a bad omen. For example, elder Peter Baton found a grizzly bear track on the end of the Mountain and knew something might happen. Two months later his father passed away. According to George Blondin, Dene laws come from such shamanic encounters with animals (1996 pers. Comm.).