This is a story about how Deerpass Bay was used in the past and in the present. In the olden days people named Deerpass Bay ‘NóreɁə’ which means ‘swimming back and forth across’. In the warm summer days animals like moose, caribou, and even bear would sometimes swim across the bay instead of going all the way around the bottom of the bay. 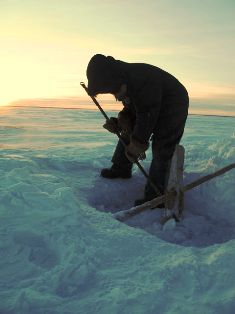 Our ancestors have used this land and water for centuries because they knew about the abundance of fish and wildlife in the area. Part of the reason for recording these stories is to help the young people today know and appreciate places like Deerpass Bay. We mentioned earlier that the Dene people think of all these places as being like a store where they can go for food when they are in need. We want our young people to focus their mind in that direction so that they can someday make a living off the land for themselves and families.

Long ago at Deerpass Bay some people built a log cabin. But as time went by a group of people dismantled this cabin and rebuilt it further up the bay. The cabin that was relocated was so old that all the logs rotted and nobody made use of it anymore. Recently a group of trappers who stayed there burnt all the cabin logs for fire wood. We visited the area and found only the imprint of the cabin floor on the ground. About five years ago John Baton built his plywood cabin there. Francis Tatti also built a cabin there, but it is located about a mile north of the shore right beside a seismic road.

Also on the north side of the bay there are three gravesites right by the shore. One of the graves is a person related to Louis Taniton, but we don’t know who the other two belong to. We also found a grave on the west shore of the bay but it was not clear if it was a grave for sure or not. Elders like Francis Tatti, George Kodakin, and Peter Baton clearly have identified it as a grave. According to these men there should be lots of graves in that area but they are difficult to locate because they are so old.

Deerpass Bay is one of the excellent places to fish. You can catch jumbo whitefish, trout, northern pike, greyling (sic) and loche. In the olden days people knew about all the fish in the lakes in the area so they would go to these areas for trapping. They would store their fish in a cache at the Deerpass Bay and live off the fish they caught from the fish lakes.

As a far as trapping and hunting is concerned our forefathers trails are still visible to follow to Mackintosh Bay and other places like to the top of Scented Grass Hills, to Tatui Lake, to White Loche Lake, and all over Gokərangə.

Again I would like to mention that the reason we are making these recordings is because we want all the young people of today to know about the importance the land is to us as Dene people.