William Sewi’s narrative on the Two Cone tells how the Shahtu Dene learned the source of the hill’s power: 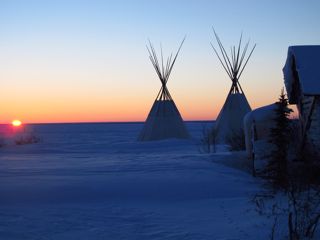 In the olden days people did not know about this sacred place where the teepee is now standing [refers to the shape of the hills]. My dad’s dad’s name was Beh oota, who is now buried at Délı̨nę, slept close to the sacred ground [during the night] the ground started to move lots. He was very powerful medicine man; it is said that with his medicine power he [looked into the earth] and saw a lion [roaring in its] den. It is ... said that we [are now] ... not [to] go near that place or sleep in that area. Because of ... Beh ootas’ vision, the people knew [more] of this sacred place, [where before they only felt the presence of power] (William Sewi interview 1996)