What to know before you visit

Walking through Port-Royal’s grand doorway is like travelling back over 400 years. Beneath steep-pitched roofs, rooms with fieldstone fireplaces and replica period furnishings remain as they would have been in this fur trading settlement.

Our national historic sites reflect the rich and varied heritage of our nation and provide an opportunity for Canadians to learn more about our diverse history; investments in preservation as destinations to celebrate our nation's achievements. Workers in 1939 and Parks Canada staff in 2018 are dressing squared timbers with adzes to produce the desired authentic hand-hewn finish.

In late April 2018, work began to restore the habitation’s aging wooden roof and palisade. The entire restoration project will use historically accurate pine wood and workers will use tools and techniques to give the cannon platform wood a historical look. Scaffolding for the roof is being set up in phases to minimize the impact on visitors. The palisades and gun platform were inaccessible to visitors last season but the wood has been replaced and they are now open for the 2019 season. A couple of the rooms in the Habitation will have sections that are off-limit to visitors due to work in the attic.

Exterior sections of the habitation have been replaced over time, but the majority of the interior wood is from the original 1939 reconstruction, built to replicate the French settlement that was there from 1605 to 1613.

Visitors are invited to observe the restoration of Port-Royal National Historic Site until the work is complete in August. 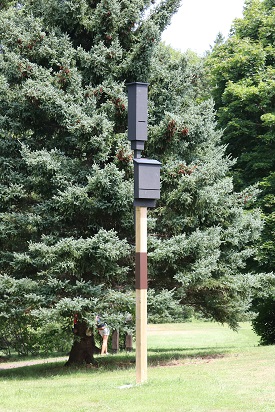 Little Brown Bats (Myotis lucifugus), Tri-coloured Bats (Perimyotis subflavus) and Long-Eared Bats (Myotis septentrionalis) have recently been listed as endangered under the Species at Risk Act due to a 95% mortality rate caused by the “white-nose syndrome” fungus (pseudogymnoascus destructans). This fungus, which was introduced to North America from Europe approximately 15 years ago, infects and kills bats during their winter hibernation. Parks Canada is dedicated to preserving and supporting the recovery of these bats.

The bat houses you see here were built by Parks Canada to provide alternate roosting habitat for the bats during restoration of the Habitation roof. They were designed and built to optimise heat and darkness in order to house maternity colonies and support the survival of future generations of bats.