Enter a doorway to the past. At Port-Royal, intriguing stories about an early French settlement, and the brave explorers that lived and dreamed here await you...

Welcome to the Habitation! 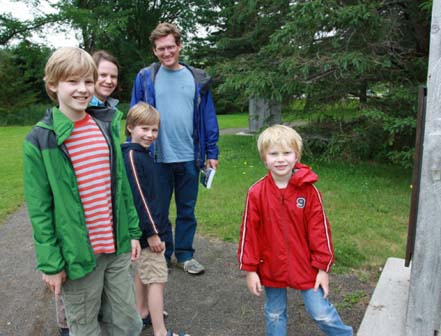 First, some orientation...As you arrive at the site, you will notice that the parking lot is in the forefront, washrooms are in the brick building adjacent to the parking lot, the picnic area is to the left, and the Habitation is about 150 metres (500 feet) west of the parking area.

Follow the crushed stone pathway to the right of the washrooms. As you walk through the trees, imagine the forest that would have stood here in the early 17th century.

Near the beginning of the crushed stone path, stands the monument honouring Membertou, one of the great Mi’kmaq chiefs. Membertou was chief of the Port-Royal area at the time the French built the original Habitation. Along with his people, he helped the French adapt and survive in Acadia. The monument was erected in 1985 to mark the 375th anniversary of the baptism of Membertou and his family into the Catholic faith in 1610.

The large wooden cross you see to the left of the pathway marks the existence, and one of the possible locations, of the burial ground at the Port-Royal Habitation. Records show that Chief Membertou was buried in the Port-Royal cemetery. Now on to the Habitation.

At the entrance, you’ll find the painted standard overhead bearing the coat of arms of Henri IV, King of France when the Habitation was built in 1605. The coats of arms of the two governors, Sieur de Mons and Sieur de Poutrincourt, are also above the doorway. 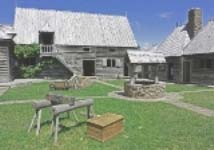 Once inside the interior courtyard, you’ll see a series of self-contained working and living areas with a well in the centre. The steep pitched roofs are typical of the Norman architecture of the period. The large fieldstone chimneys draw the smoke from the fireplaces. 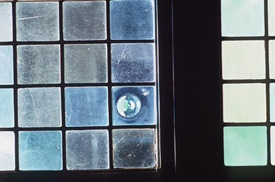 Inside the Gentlemen’s Dwelling, you’ll find paintings by noted Canadian artist and historian Dr. Charles W. Jeffreys, depicting life at the Port-Royal Habitation. The room contains an odd-shaped pane of glass in the window. It almost looks like the bottom of a modern pop bottle. This “bull’s eye glass” is the centrepiece of a sheet of spun glass, and it was too valuable to be wasted in those days. Today such glass is prized. A copy of Champlain’s picture plan and map on the wall situates the site and its appearance. 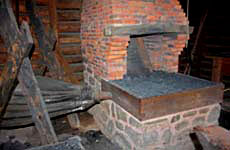 The blacksmith fabricated the hardware needed to build and keep up the Habitation. If need be, he could fabricate goods for trade with the Mi’kmaq. He contributed directly to the financial well-being of the settlement and was paid handsomely. The large bellows provided a source of oxygen to keep the fire going in the forge. Many of the tools displayed in this room date back to the early 17th century. Glass being expensive, many of the working areas had shaved animal skins treated with oil for window panes. A gravel floor safeguards against sparks starting a fire on the floor. The foot-powered grindstone in the corner was used to sharpen tools. When the Habitation was occupied in the 1600s, metal trade goods and hardware for the buildings were manufactured here using iron brought from France. 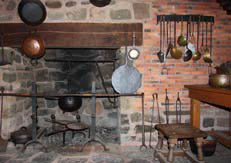 Imagine yourself by the fireplace cooking a roast of moose on the spit. Here you’ll find “en colombage” wall construction and a large hearth where the settlers prepared meals. Have you heard about the “Order of Good Cheer”? Let’s go to the Common Room and learn more about it. 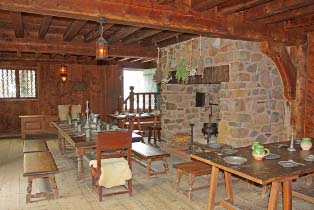 Upon entering the common room, you’ll notice the huge wooden beams used in the construction. “Mortise and tenon” construction was used in the framework of the Habitation. The large wooden tables, well appointed with pewter, suggest that much food and wine was enjoyed within these walls. Samuel de Champlain began a social club called “l’Ordre de Bon Temps” ( The Order of Good Cheer ) to ensure the men at Port-Royal had a proper diet, a source of activity, and a source of entertainment to help pass away the long winter nights. Such delicacies as fricassied beaver tail and boiled moose nose were common fare. 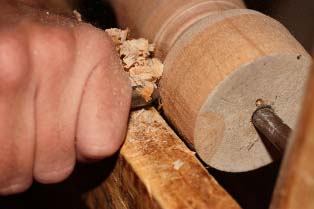 Many skilled workers built the Habitation. Joiners, carpenters, masons, stonecutters, locksmiths, workers in iron, and woodsawyers were among the artisans present at the Habitation. Required to work three hours a day at their trade, these men were then free to do such things as hunt, tend to their gardens, or gather mussels. The foot-powered spring pole lathe found in the room next to the Common Room can be used to turn wood for many objects from spindles to goblets and candlesticks. An interpreter demonstrates how it works. 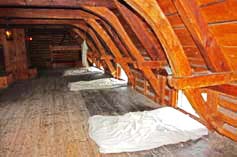 Upstairs, bunk beds with straw mattresses and wool blankets represent the artisans’ sleeping quarters. Some of the mattresses are on the floor as the place could get quite crowded in the summer. Sick people rested in the two small enclosed areas next to the chimney. What do you think the men would have used for toilets? At the far end of the room, you will see a wooden bucket. If you think you get cold in your room from time to time, imagine what it would be to sleep here in the winter. 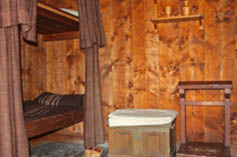 Each gentlemen’s dwelling (or room) has bunk beds with draw curtains. There were usually two to four gentlemen per room, and each room is equipped with a fireplace, table and chair, a wardrobe, and a large bench called a settle. 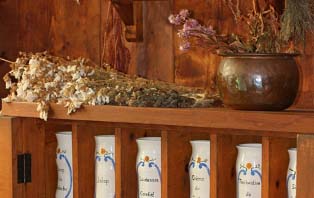 One of the four gentlemen’s dwellings belonged to the apothecary. Here he crushed herbs with his mortar and pestle to make various remedies. The Mi’kmaq taught many herbal remedies to the French. 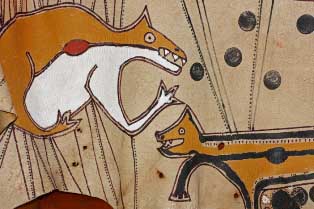 This well-furnished room displays the coats of arms of Sieurs de Mons and Poutrincourt as well as the French fleur-delis above the large fireplace. Take a look at the decorated smoked moosehide. The Mi’kmaq elders wore similar painted hides and the French admired their work so much they used these hides as murals or tapestries. 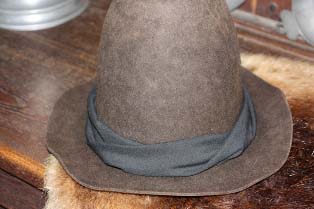 Sieur de Mons’ colony was closely tied to the success of the fur trade. The storeroom and trading room illustrate this economic activity. The key to merchant support and economic survival was the fur trade. Beaver felt hats were very popular in France, and as the supply of beaver was dwindling in France, people looked to North America. The Mi’kmaq brought pelts such as beaver, muskrat, otter, fox, wolf and raccoon in return for the trade goods like iron axes and knives, copper or iron kettles, cloth, beads and iron fish hooks.

Other areas that remain to be explored: the cannon platform, palisade, wine cellar and gunpowder room. The beautiful view of the Annapolis Basin and river inspires the imagination: a sailing vessel arriving laden with supplies for the coming winter.

Come visit us at Port-Royal National Historic Site this season and we’ll be happy to show you our doorway to the past.