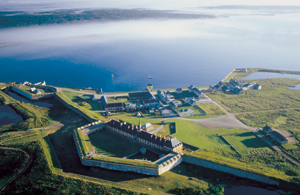 In 1961 the Government of Canada began a $25 million project aimed at reconstructing approximately one-quarter of the original town and fortifications. Within this area the buildings, yards, gardens and streets are being recreated as they were during the 1740s, immediately preceding Louisbourg's first siege.

The work at Louisbourg has required an inter-disciplinary research effort. Archaeological excavation has yielded millions of artifacts as well as the ruins of fortifications and buildings. Some 750,000 pages of documents and 500 maps and plans have been copied from archives in France, England, Scotland, the United States and Canada. The historical evidence reveals much about life at Louisbourg and provides an excellent base for the study of the French in North America.