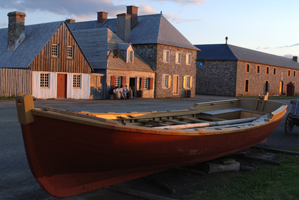 The French came to Louisbourg in 1713, after ceding Acadia and Newfoundland to the British by the terms of the Treaty of Utrecht, which ended the War of the Spanish Succession. France's only remaining possessions in what is now Atlantic Canada were the islands of Cape Breton and Prince Edward, which were then called Isle Royale and Isle Saint-Jean. The French used these islands as a base to continue the lucrative cod fishery off the Grand Banks. In 1719 they began to construct at Louisbourg a fortified town which was only completed on the eve of the first siege in 1745. The town and settlement along the harbour shore soon became a thriving community.

The cod fishery accounted for most of Isle Royale's prosperity. Dried before export, the fish was salted and laid on stages which lined the beaches of Louisbourg and its outports. Louisbourg became a hub of commerce, trading in manufactured goods and various materials imported from France, Quebec, the West Indies and New England.

One might think that the fortress would be prepared for any onslaught. Yet, while the harbour was well defended, the main landward defences were commanded by a series of low hills, some dangerously close to the fortifications. All provided excellent locations for siege batteries.

The first attack came in 1745 following a declaration of war between Britain and France. Charged with the fervour of a religious crusade, and informed that the fortress was in disrepair with its poorly supplied troops on the verge of mutiny, the New Englanders mounted an assault on Louisbourg. Within 46 days of the invasion the fortress was captured. To the chagrin of the New Englanders, only three years later the town was restored to the French by the Treaty of Aix-la-Chapelle. In 1758 Louisbourg was besieged a second time. Without a strong navy to patrol the sea beyond its walls, Louisbourg was impossible to defend. Attacking with 13,100 troops supported by a 14,000 crew on board 150 ships, a British army captured the fortress in seven weeks. Determined that Louisbourg would never again become a fortified French base, the British demolished the fortress walls.