This is the best place to start your visit to the Halifax Citadel. Get a general overview of the site and set out on your own adventure. Or join us for one of many walking tours that depart from here throughout the day.

They were cramped, damp, sparsely furnished, and, sometimes, the only privacy you had was a grey army blanket. Conditions in the barracks of the 19th century were anything but glamorous for members of the 78th Highland Regiment and their families. Step inside to see for yourself. Try on the soldiers’ famous headgear. Lift their heavy packs from their modest steel-frame beds. Or open their kits to see how they kept themselves and their uniforms crisp and clean for inspection. These artifacts will give you some insight into what life was like at the Halifax Citadel many years ago. 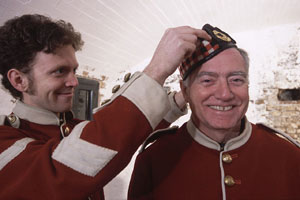 The tailor shop kept the regiment clothed. The tailor was responsible for keeping the soldiers in style with their MacKenzie tartan kilts and bright red doublets. Visitors will delve into the craftsmanship that went into these impressive uniforms.

This is the room where the royal engineers stored supplies and spare parts for the various buildings of the Halifax Citadel.

Imagine what it was like to send a message to someone before the invention of the Internet and cell phones. The signal flag display will transport you back to the days when this was the main means of communication between the Halifax Citadel and York Redoubt. Not only were flags used to send coded messages, they also announced the arrival and departure of commercial ships in Halifax Harbour.

If you had business at the Halifax Citadel, you came here first to see the Sergeant of the Guard. If he determined you had reason to be here, he gave you a pass so you could continue on your way. The guardroom was also an exceptional spot for keeping watch over the Halifax Citadel’s sentry points. Today, you can watch the sentry change every hour on the hour and then visit the lock-up where troublesome soldiers were held.

If you were a soldier at the Halifax Citadel in the 19th century, your orders for the day came from this room. Everything from what you wore, to your duties, to punishments for your infractions, was decided here. Today, you’ll find a dip pen, fresh paper and India ink on-site waiting for you to write out your own commands. 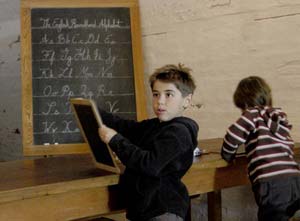 Come in and take a seat. Class is about to begin. Today’s lesson will explore what education was like for soldiers and their children in the 19th century. We’ll be covering British history, math and moral conduct. We also have slates for you to write on, and a counting ball (or abacus) for solving math problems. And remember, if you have any questions, just ask the schoolmaster.

Cool, dark and dangerous, this earthen, underground room is where the explosive charges for the Halifax Citadel’s cannons were stored. Here, soldiers filled the charges with gunpowder, and placed them in tins to keep them secure.

The gunpowder for the Halifax Citadel’s armaments had to be stored in a safe, dry place. This magazine is where the barrels were kept, which made it the fort’s most dangerous spot. You had to be very careful handling the barrels. One spark was enough to set them off, resulting in more damage than any enemy attack could cause. That’s the reason why soldiers stationed here wore wooden shoes, buttons and buckles.

It catches your eye as soon as you enter the room – the cannon pointed at the window. It is a reminder that the casements were built to protect the Halifax Citadel. In the event of an attack, these guns would fire into the Halifax Citadel’s ditch. When there were no threats, these casements served as prison cells. Soldiers convicted of minor offences, such as drunkenness and cursing, were held here. For more serious offences, such as theft and attempted murder, they were sent to Melville Island, located in Halifax’s Northwest Arm. 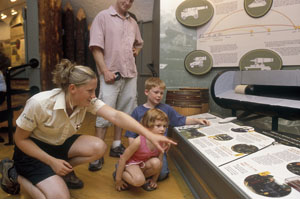 Fortress Halifax - Warden of the North

It’s an experience more than two hundred years in the making. Explore the development of Halifax’s defences from modest wooden forts to the mid-20th century in this award-winning exhibit. Models and artifacts reveal the many influences that shaped the history of this military and naval port. And you’ll see the crucial role the Halifax Citadel played in the Halifax Defence Complex.

A Harbour Worth Defending
Presenting the story of the Citadels that have occupied this hill, and how they protected Halifax, this 15-minute film reveals the city’s strategic role as a British and Canadian naval base. Located at the Information Centre. 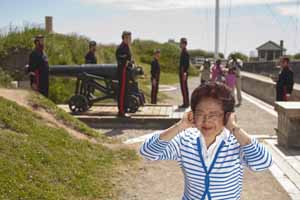 The Citadel's living history program brings to life the 78th Highlanders and the 3rd Brigade, Royal Artillery, with activities such as sentry changes, the noon gun, performances of the pipes and drums and rifle and cannon firing demonstrations. See more...

Exhibits of artifacts, photographs and documents of Atlantic Canada's military past. See more...