There are many stories we could tell you about the Halifax Citadel. Some reveal what life was like for the soldiers here. Others shine a light on why it holds a special place in the history of Canada.

We’ve selected a few of our favourites to share with you. But if you want to know the whole story, come visit the Halifax Citadel. There’s so much more to discover.

On June 21, 1749, Edward Cornwallis arrived in Chebucto Harbour with 2,576 colonists from Britain. Work began immediately on clearing land for a new settlement named for their patron, the Earl of Halifax, President of the Board of Trade and Plantations. Soon after, a series of fortifications appeared, including a wooden garrison near the top of a mighty hill overlooking the harbour. This was the first Halifax Citadel.

This new fortified community was part of a wave of British settlements that began in Nova Scotia in 1748. The French had regained control of Louisbourg on Cape Breton Island, and the British believed they would attack the mainland. Halifax and its deep, ice-free harbour offered a strong counterbalance to such threats. The hill where the first Halifax Citadel was built offered the best vantage point to protect the town.

On September 11, 1749, British troops completed work on the first Citadel. Unlike the current fort, it was built of wood, not stone. As it turned out, it was the climate, not the French, which posed the greatest threat to this garrison. Fog, rain and cold winters contributed to its decay, as did neglect.

Meanwhile, Halifax continued to grow, becoming the capital of Nova Scotia when representative government was granted to the colony in 1758. But a new threat was soon to appear. The outbreak of the American Revolution in 1776 again raised concerns that this vital British naval base would be attacked. The time had come to build a new Citadel.

In 1761, the first Halifax Citadel was in shambles, but it had not been attacked. Years of neglect and Nova Scotia’s damp climate had taken their toll. Work began on a new fort, but a series of setbacks meant it was not completed for several years. 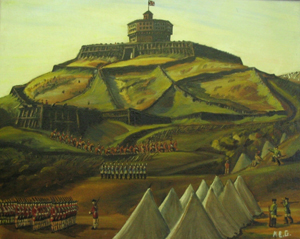 Plans for a new Citadel called for the hill to be cut down by 40 feet. Yet there were very few soldiers stationed in Halifax at the time to do the work. Though 1,000 soldiers came from Massachusetts in 1761 to aid in the effort, little progress had been made by summer’s end. Plans to continue the following summer were set aside when the French attacked St. John’s, Newfoundland. Instead, the British were forced to strengthen the harbour’s defences on Georges Island and the Halifax and Dartmouth shores for fear of an attack.

It took the outbreak of the American Revolution in the 1770s to shift the focus back to Halifax’s land defences and the Citadel. Many Halifax residents had come from New England, and supported the revolution. Fearing the Americans would launch a land attack, British troops, led by Captain William Spry, constructed a new fort, using an expanded version of the plans from 1761. The highlight was a large octagonal tower, which served as a barracks for 100 soldiers.

Like the fort before it, the second Citadel never saw battle. By 1784, it was also in ruins due to neglect and Nova Scotia’s climate. It would take renewed hostility between British and French forces to lay the groundwork for a third fort atop Citadel Hill.

When Prince Edward, the Duke of Kent, arrived in Halifax in 1794 as commander-in-chief of British forces in Nova Scotia, Britain and France were at war. Though the fighting took place a world away, there was reason to believe the French might attack this strategic British naval base. Yet Halifax’s defences were in poor shape, so Edward began a campaign to strengthen them and build new fortifications. This effort included a third Halifax Citadel named for Edward’s father, King George III. 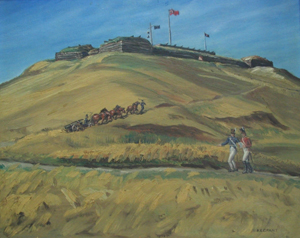 Though plans for the new Halifax Citadel were approved in 1795, a shortage of men and material meant work did not really get underway until 1796. By then, the old fortress had been levelled and the hill cut down by 15 feet.

It took four years to complete the new fort, the first one to be set directly atop the hill. Similar in size and shape to the existing Citadel, it was smaller than its predecessor. Made primarily of earth and timber, there were just three major buildings within its walls: a barracks, a provision store and a powder magazine.

Much like the first and second Citadels, this third fort never saw battle. Many repairs were made to it over the years, including patchwork during the War of 1812, but it was in ruins by 1825. And planning soon began for a fourth, more permanent fort. 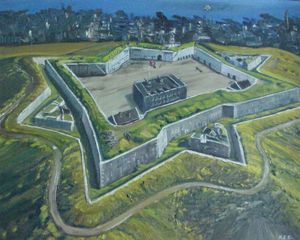 In the 1820s, tensions between Britain and the United States were running high. So much so, that Britain believed US forces would try to seize Halifax, possibly by land, if a war broke out. Once again, they set out to strengthen the town’s defences, but this time was different. This time, they decided to build a permanent fort that would protect this vital naval base for generations to come. And in August 1828, work began on a fourth Halifax Citadel.

Designed by Colonel Gustavus Nicolls, Royal Engineers, this new star-shaped stone fortress was expected to be finished in just six years. Flaws in his design caused delays in construction, and the Halifax Citadel was not completed until 1856. Like the citadels before it, this new fort never saw battle, and advances in weaponry would soon render it obsolete.

New life for the Citadel

In 1906, the British handed the Halifax Citadel over to the Canadian Department of Militia and Defence. During World War I, it served as soldier barracks and a command centre for Halifax Harbour defences. It remained a temporary barracks for troops in World War II, and was their last glimpse of Canada before heading overseas.

Today, the Halifax Citadel is among the nation’s most significant and beloved historic sites. Operated by Parks Canada, it has been carefully restored to its Victorian-era glory. And its story, which endures through exhibits and living history programs, is a vital thread in the fabric of the city and the country.