You hear the bagpipes at the Halifax Citadel National Historic Site and turn to see a remarkable sight. The 78th Highlanders are approaching in all their finery. How could this be? This regiment left in 1871. But this is no illusion. It’s a unique glimpse of Victorian Halifax and part of the fort’s Living History program. 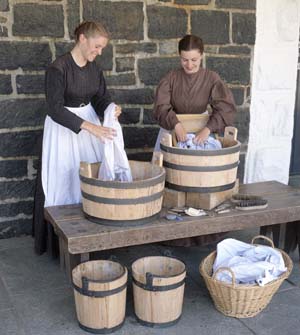 Every summer, the Halifax Citadel transports you back to 1869, when the famous 78th Highland Regiment was stationed here. Except the soldiers you’ll meet are members of a historical re-enactment group, many of them students. From the firing demonstrations to their MacKenzie tartan kilts, they recreate the day-to-day lives of these soldiers right down to the last detail.

You’ll also find the soldiers’ wives washing laundry, sweeping, or doing needlework around the Halifax Citadel. Stop and chat with them. They always have time for a conversation about the city’s past. 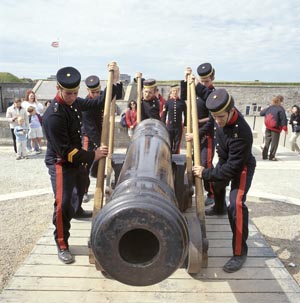 Get fired up with the Royal Artillery

It’s a Halifax tradition. Every day, the Royal Artillery fires the noon gun at the Halifax Citadel. Dressed in their crisp blue uniforms, they look like the real thing. But like the 78th Highland Regiment, they’re really re-enactors.
A common sight at every British fort, the Royal Artillery maintained and operated the armaments, ammunition, and powder. Today, these re-enactors perform drill demonstrations on 12-pounder and 32-pounder smoothbore guns, and 7” rifled muzzle-loading guns. They’ve also been known to fire a 32-pounder on some afternoons, simply for your entertainment. And they operate the Halifax Citadel’s commercial and military signal masts, indicating that all are welcome to visit and experience this special historic site.