The Army Museum displays rare and unique military artifacts. Some date back to the days when Halifax was a vital British naval port. Others trace the evolution of Canada’s forces, and the formation of our post-World War II alliances. Together, they tell a story that spans more than 400 years.

The Road to Vimy and Beyond - new! 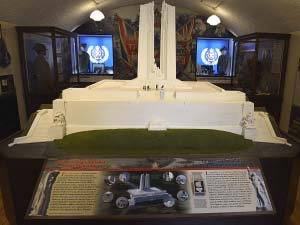 A key element of The Road to Vimy and Beyond is the best replica of the Vimy Memorial* in the world. The replica is the most complete, in terms of size and detail, and is specially lit and interpreted with panels so visitors can learn about its significance and thus the importance of the battle that was fought at Vimy Ridge.

*The Vimy Memorial, a Canadian national memorial, is located in Vimy, France.

Since 1953, the Army Museum at the Halifax Citadel, a private, non-profit institution, has been faithfully preserving and promoting Atlantic Canada's military heritage. The items on display come from a vast collection of more than 70,000 military artifacts. It is a member of the Organization of Military Museums of Canada, operating with the assistance of the Nova Scotia Museum and Parks Canada.

Learn more about the Army Museum and its collections by visiting its website: www.armymuseumhalifax.ca