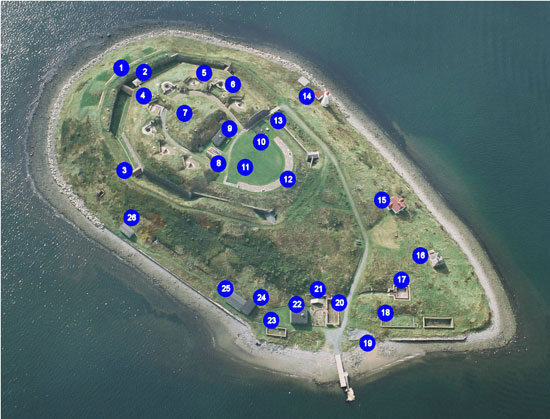 In 1794, Prince Edward, later the Duke of Kent, arrived as the commander of the Halifax forces. Seeing Georges Island as key to the harbour defences, he ordered the construction of a star-shaped fortification on the island which he named in honour of his mother, Queen Charlotte. In the 1860s, the fort was largely reconstructed in response to the development of rifled muzzle-loading artillery and, as a result, acquired two powerful seaward-facing batteries.

1 – Lower Battery: Houses four 10-inch rifled muzzle-loading gun emplacements. Each gun weighed 18 tons and fired 400 lb projectiles.
2 – Ditch: Deep trench between the inner (escarp) and outer (counterscarp) walls of the fort.
3 – Caponiers: Covered passageways with loopholes connecting the inner (escarp) and outer (counterscarp) walls of the fort to permit rifle cover for the ditch.
4 – Upper Battery: The Upper Battery consists of eight gun emplacements and an underground main magazine and tunnel complex.
5 – 9-inch Rifled Muzzle-Loading Gun Emplacements: Five of the original eight rifled muzzle-loading gun emplacements dating to the 1864-89 reconstruction of Fort Charlotte remain in the Upper Battery. Each gun weighed 12 tons and fired 250 lb projectiles.
6 – Quick-Fire Gun Emplacements:  By 1902, Fort Charlotte's rifled muzzle-loading guns were obsolete and were replaced by a three gun battery of 4.7-inch quick-fire guns.
7 – Main Magazine and Tunnel Complex:  This underground complex serviced the guns of the Upper Battery.
8 – Rifled Muzzle-Loading Laboratory: Workshop where explosive shells and powder charges, or cartridges, were filled with carefully specified amounts of gunpowder.
9 – Artillery Store: Used to store fittings for service of the guns, such as sights for aiming, and possibly handspikes and tackle for shifting the guns.
10 – Forge: Also known as the Blacksmith's Shop, this building was used to make small repairs to the fittings of guns and carriages and would contain a forge, anvil, grindstone, and bench with a vice.
11 – Fort Charlotte Parade Square: Level area inside a fortification used for assembling troops.
12 – North Battery: The North Battery, which was not significantly altered during the 1864-69 reconstruction of Fort Charlotte, retained its eight smoothbore gun emplacements.
13 – Main Gate / Guard Room: A retractable bridge running across the ditch allowed guards to control the entrance to Fort Charlotte.

In 1856, following a number of ship collisions with Georges Island at night or in heavy fog, Halifax merchants began lobbying the local government to have a lighthouse erected on the island. Twenty years later, in 1876, the first lighthouse was constructed on the western slope of Georges Island to serve as a navigational aid for vessels in the harbour. Made of wood and with a residence for the lighthouse keeper attached, it operated for 40 years before being destroyed by fire in 1916.

14 – Lighthouse: Finished in 1919, the current lighthouse was built of concrete to reduce the threat of fire. Today, the lighthouse is owned and operated by the Canadian Coast Guard as is the remote radar tower, disguised as a signal mast within Fort Charlotte. The radar was first installed in 1974 to assist with harbour traffic control.
15 – Lighthouse Keeper's Residence: For nearly 100 years, a lighthouse keeper lived on Georges Island. Originally, the residence was attached to the lighthouse but, following the 1916 fire which destroyed the first lighthouse, a separate dwelling was constructed. In 1972, the last lightkeeper left the island with his family after the lighthouse was converted to one of the first fully automated lighthouses in Canada.

In the 1870s, Georges Island became the headquarters for a system of submarine mining developed to protect Halifax harbour from enemy vessels. Submarine mining was possible due to improvements in the science of explosives and electrical technology. Mines were made of charges of gun cotton (fibrous material like cotton or flax soaked in explosive liquid like nitric acid) enclosed in water tight metal cases, and moored underwater at the appropriate depth to sink or damage a nearby vessel when exploded by electrical contact from shore. This was state-of-the-art technology in this period and Halifax was one of the first colonial harbours in the British Empire to be approved for a system of submarine minefields. With the addition of submarine mines to its arsenal of weapons, Georges Island reached the zenith of its military importance. However, due to the dangers it posed to non-enemy vessels, submarine mining was stopped in 1906.

16 – Married Officers' Quarters: Constructed in 1901 and used to accommodate married officers and their wives until 1905.
17 – Dry Primer Store: Used for testing and storing fuses.
18 – Gun Cotton Tanks: Gun cotton is non-explosive when wet but returns to its original explosive effect when dried, placed in a mine case and primed with a fuse.
19 – Case Store: Used to store empty mine cases that would be filled with guncotton.
20 – Loaded Mine Store: Used to store the loaded submarine mines.
21 – Connecting-Up Shed: Location where cables, fuses and electric apparatus would be connected to the loaded mines, which would then be stores in the casemated mine store constructed at the rear of the shed.
22 – Coal Storage Building: A multi-purpose structure which served as a Guardhouse, Fire Engine House and for coal storage.
23 – Cable Store: Likely used to store bulk cable before the cable was cut into appropriate lengths and stored in the cable tanks.
24 – Workshop Building: Housed a smithy and a carpenter's shop and was used to prepare materials and conduct electrical work associated with the mines.
25 – Cable Tanks: Used to store, test and maintain prepared cables that would be connected to the mines.
26 – Test Pits: Used for trial detonations of mine primers by electrical current.