Georges Island was first armed with a seven-gun smooth bore battery of cannons in 1750. Its role was to protect the fledgling settlement of Halifax from a sea attack.

Georges Island was also used as a prison in the early years. During the years of the Acadian Deportation (1755-1763), the island became a holding area for large numbers of Acadians. No buildings from that period remain.

During the American Revolution, Georges Island, along with the rest of the defences in Halifax, were updated and renewed. The defences mainly consisted of sprawling, irregular earthworks. The Americans did attack several Nova Scotia locations during their war for independence, but not Halifax.

When Great Britain and France again went to war in 1793, Halifax’s role as a fortified stronghold and naval base once more came to the fore. Prince Edward, Duke of Kent, a son of George III and later the father of Queen Victoria, sailed into Halifax in 1794 to become its commandant.

Prince Edward had an immediate impact in Halifax and, among other projects, built a proper fort on Georges Island in 1798. He named the star-shaped fortification Fort Charlotte after his mother, Queen Charlotte. Later, during the war of 1812, a Martello Tower was added to the fortifications on the island. Altogether five such towers were eventually built in Halifax.

In the aftermath of the War of 1812, the British reassessed the likelihood of more conflict with the United States. In Halifax the priority was the construction of a new more powerful fort atop Citadel Hill. This fourth fort was the most elaborate of Halifax’s defences and is still there today. 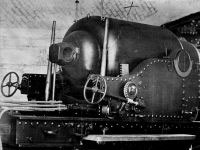 The invention of rifled ordnance in the late 1850s had a drastic impact on warfare and fortifications around the world, including those on Georges Island. These new guns fired shells farther and with greater accuracy, which necessitated a wholesale change in harbour defence strategy.

The need to update the Halifax defences with the new rifled muzzle-loading guns (RMLs) became a priority during the American Civil War. There was concern that the conflict might widen and involve Britain's North American colonies. Among the many changes made to the Halifax fortifications at this time was the construction of a new Fort Charlotte on Georges Island.

The new fort was largely subterranean, with a maze of tunnels, corridors, powder magazines, storage rooms and sleeping quarters buried deep inside the island. Eight 9-inch RMLs were installed in an upper battery and four 10-inch RMLs in the underground lower battery.

In the 1880s and 1890s, the rapid pace of weapons development soon rendered Fort Charlotte’s RML guns obsolete. In response, the British installed a new torpedo system and established a manually operated submarine mine field across the harbour channel. The addition of quick-fire guns was also undertaken as a defence against fast torpedo boats. With the introduction of long-range and more accurate breech-loading cannons (BLs) the main harbour defences had to be moved farther out from the central harbour. This resulted in the building of new forts on McNabs Island. The overall impact of these changes saw Fort Charlotte on Georges Island gradually reduced to a minor role in the defence of Halifax harbour. 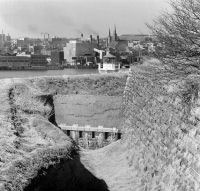 Fort Charlotte with Halifax in background
© Department of National Defence

The island remained a seaward defence after the Government of Canada assumed responsibility for the Halifax defences from the British in 1906. Georges Island played a minor role in the defence of the harbour in World War I, and a submarine net was erected on both sides of the island to prevent enemy submarines entering the inner harbour. During World War II an anti-aircraft unit was stationed there. They were the last soldiers to serve on the island.

The island was declared a national historic site in 1965.