Come see it – let it speak to you! 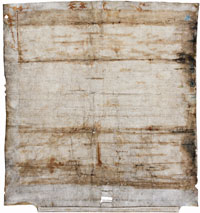 Nearly four centuries ago, a document was signed which established a Scottish colony in North America. The Charter was really the blueprint for New Scotland – did you know that one of the original parchments still exists?

Besides the original signed Charter, there were at least two period hand-written copies made. One copy is on display in the Officers' Quarters Museum at Fort Anne National Historic Site. This incredible artefact is an icon in the true sense of the word – without it, it is unlikely there would be a Nova Scotia today. 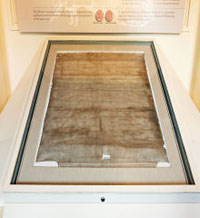 Today, at Fort Anne, in dim light, the Charter sits encased under glass. 'Tattered' is not quite the word to describe the Charter's present three-dimensional integrity, but it will do. It has been folded once (or twice, or three times) too often for its own good; there are definite un-planned for holes in the fabric; whole sections appear water-damaged and have given themselves over to what appears to be a somewhat 'furry' consistency. Here the ancient lettering, over the centuries, has seemingly eaten itself into the hide, giving those sections a somewhat other-worldly appearance.

While it appears to sit mute, it speaks volumes to those who take the time to question it. Your first question might be: 'This thing is a wreck - has it always looked like this?' The answer is 'no, it has looked worse!'

The condition of the Charter before treatment by Parks Canada in 1986 is documented as being:

"Handwritten (Latin) document 79 cm x 85.3 cm. Heavily ingrained surface dirt which does not respond to cleaning with rubber or vinyl erasers. Parchment is extremely rigid and brittle; there is a small missing portion bottom right. Extensive blue staining covers much of the text areas and is thought to be a previous attempt to enhance the handwriting using prussian Blue. (See analytical report) pH at the parchment surface is 5.5, stained areas pH 5.0. The parchment is badly buckled and has numerous deep z shaped creases."

The treatment involved getting the pH high enough to fade the blue staining, and flattening the document.

Sensing a certain disdain in your attitude, the Charter seems to ask you a question: 'Where were you on September 10th? September 10th, 1621? Can't recall? Well, if perchance you were at Windsor Castle, 20 miles to the East of London, England, as I was, you would have been in good company – for King James the First of England (at the same time King James the Sixth of Scotland) was present. And, if James were around today, he too might have a tattered appearance, so give me a break.”

A Gift With Strings Attached

Quite likely King James' good Scots friend Sir William Alexander was also at Windsor Castle that 10th of September. Won over by his friend's persuasion, and conscious, too, of the benefits to Great Britain, the King signed a Royal Charter that made a gift to his friend. A gift with strings attached, however, for while the document granted to Sir William a vast swath of what would become known as North America, it also charged him to fulfill many tasks, at great personal financial risk.

The Charter as Blueprint of Nova Scotia 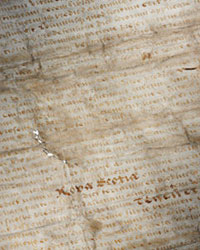 If friendship and diplomatic expediency can be said to be foundation stones, this Charter might be the blueprint of the structure raised thereon – the creation of a New Scotland in the New World. This blueprint outlined rights and responsibilities as they applied to religious conversion of natives, mineral and fishery exploitation, erecting settlements, defence, etc. – quite typical of other Charters of other nations at that time. But this Charter is special - regard once more the parchment before you. If you can decipher nothing else, do not the words 'Nova Scotia' jump out at you? Without the fundamental, three-dimensional reality of this Royal Charter - given the shifting focuses of the times and the death of the King - the eventual settlement of Charles Fort might never have come to be, and, certainly, it is unlikely the name of Nova Scotia would have been carried forward and established in fact.

An Icon, in the true sense of the word

Did this copy originally belong to Sir William, or his son, the next Sir William Alexander, the one who actually came to Nova Scotia in 1629? Again the Charter whispers to us - maybe a couple of those holes are actually ears, for it tells us of overheard remarks; King James to the Alexanders: “Dear friends, I shall cause to be made a copy of said document, for your use alone. Do take proper precautions to keep it well – do not cause it to be folded too often, keep it clean and out of ye direct sunlight, so that good Nova Scotians, four centuries hence, can easily read it!” James might have said that! We currently have no accurate sense of the journeys the Charter copy has made over the past nearly 400 years.

So visit Fort Anne. You can press your nose against the glass that encases this glorious relic and observe that, yes indeed, as suggested, the words NOVA SCOTIA have nicely defied the ravages of time and stand out, just as the province they represent has survived and stands out in its corner of the New World. You can speculate on the mystery of our time-travelling artefact, whether or not King James did himself hand this copy to his dear friend and if they then exchanged further words concerning how William would turn Latin phrases into reality.

But beyond reality, this Charter is about dreams and it is about mystery. And it does exist. Come see it – let it speak to you. Listen carefully and maybe you alone will be told more of the story.

Get the Whole Story