Welcome to Fort Anne! We thought we’d give you a sneak preview of some of the amazing sites you’ll see when you visit us.

Let's tour the exhibits first. We enter through the main entrance on the north side of the building. After paying our entry fee and receiving some orientation to the site, we begin the exhibits. Wow! The first thing we see is the Fort Anne Heritage Tapestry which was designed by Kyoko Grenier-Sago. Over 100 volunteers crafted this unique 8ft x 18ft (2.4m x 5.5m) work using three million stitches. Four centuries of area history are depicted through the colourful scenes and vignettes.

As we continue through the National Interpreters' Association (NIA) award-winning exhibits, we have an opportunity to see: 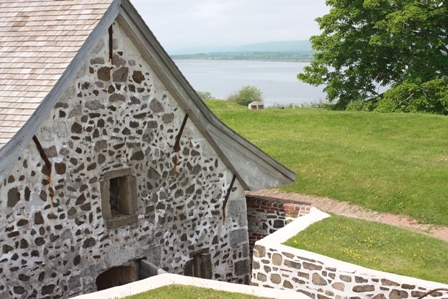 Now we're ready to go outdoors. We think we'll just wander around, read the signs and see whatever interests us... In the parade square, the open space here in front of the Officers' Quarters, we see signs around the perimeter, showing where some of the buildings were when the fort was garrisoned, including a store house, the governor's residence, barrack's site, and the chapel site. In the south corner of the parade square, is a restored powder magazine, originally constructed by the French in 1708. It's kind of neat inside. Barrels stacked on one side, and a cool draft comes through. The interpreter mentioned that this is to keep the powder dry. 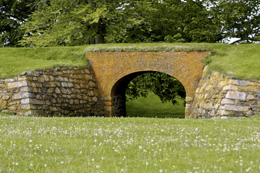 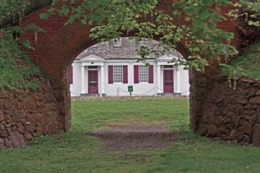 
If we continue along this southwest side of the parade square, we pass the Sally Port. This entrance into the fort grounds was used by the British. Earlier the French had a gate here. Many popular pictures of the Officers Quarters' are taken through this opening. 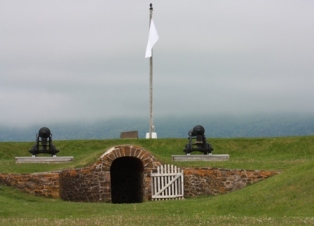 In the far corner of the parade square is another structure. Known by the staff as the "black hole," this powder magazine was built into the west bastion by the French. After 1740, it was abandoned as a magazine because of chronic dampness and was used sporadically as a prison by the British.

One of the most striking features of the fort is the earthworks, the best surviving example in North America of a Vauban fort. Vauban (1633 - 1707) was a French military engineer. Essentially square in shape, four projecting bastions at each corner allow protection on all flanks. The fort is surrounded by a dry moat with very steep banks, followed by the glacis, an open sloping area also surrounding the fort, originally intended to make secret approaches by enemies impossible. 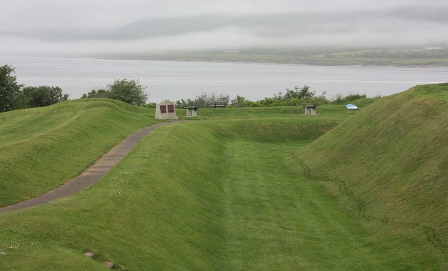 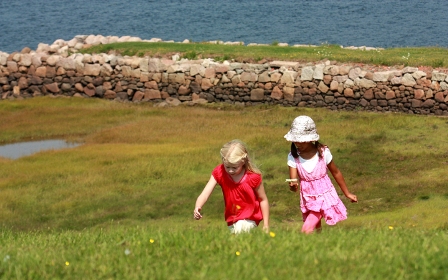 Since we don't have a helicopter, perhaps the best way to see the earthworks is to walk around the perimeter trail that circles the fort. Not only can we see the extent of the grounds, but there is an excellent view of the Annapolis River and basin all the way to Digby, approximately 30 kms away. 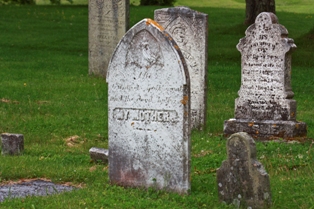 Gravestones of the cemetery at Fort Anne
© Parks Canada/A. Rierden

As we follow the perimeter trail we come to the Fort Anne cemetery. This cemetery, the Saint-Jean-Baptiste cemetery, served the Acadian community and also served as the burial ground for the French military forces here. It was also used during the British period; it served both the military and parish of St. Lukes. We must take the time to wander through the cemetery to see the tombstones still in place. The earliest is from 1720. As we look at more and more recent tombstones we can see the art change from the dramatic depictions of winged skulls, to weeping willow trees to the more familiar angels of today.


Of course, if you come to Fort Anne National Historic Site, you will see much more than the above tour. Four hundred years of history has left many tangible traces here at the site and in Annapolis Royal.