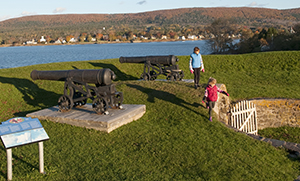 Today, nothing remains – at least aboveground – of Charles Fort. But, for visitors armed with a little historical background, the site is a window to the tumultuous early days of European colonization.

Under royal charter, Scottish noble Sir William Alexander, plus a group of 70 men and women, first set foot in Nova Scotia in 1629. They built a headquarters and named it Charles Fort, in honour of the king. During the first, hard winter, 30 settlers died.

But both Mi’kmaq peoples and French settlers also laid claim to the area, and in 1632 the Scots were obliged to cede the fort to the French, who would build a series of four forts on the same site. The final one, seized by the British in 1710, became known as Fort Anne.

As you walk through the remains of Fort Anne today – earthen defenses, officers’ quarters and powder magazine – echoes of Charles Fort still linger. Visitors can learn more about Charles Fort inside the Officers’ Quarters Museum.