Canada’s participation in the First World War (1914-1918) and the Second World War (1939-1945) touched every community in this country. Through displays and activities at Parks Canada places across Canada, Hometown Heroes honours everyday Canadians whose efforts during the First and Second World Wars helped to protect and build our communities and, thus, the entire nation. Whether it was bearing arms on the front lines, organizing home defences, or knitting socks for the troops overseas, the individual contributions of heroes from coast to coast to coast were essential to our war effort.

Get to know the remarkable stories of these Hometown Heroes, honour their memory and express your gratitude for their service by visiting Parks Canada’s National Historic Sites, National Parks, and National Marine Conservation Areas. We Will Remember Them… 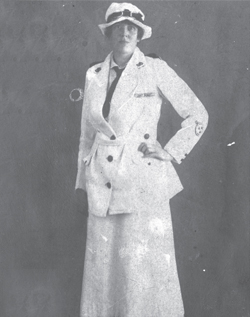 Frances Cluett was born in 1883 in Belleoram on the south coast of Newfoundland and was a school teacher in the community at the outbreak of the First World War. Working first for the Women’s Patriotic Association, in 1916, at the age of 33, Cluett volunteered with the Voluntary Aid Detachment (VAD) for service overseas. During the First World War, the VAD provided support to military hospitals in the form of nursing members, drivers, cooks, maids, clerks as wellas other essential services.

After training at a hospital in England, Cluett was assigned to the 10th General Hospital in Rouen, France. In a series of letters to her family at home in Newfoundland, she clearly and candidly illustrates the cost in human suffering of the war upon both the wounded soldiers and those tasked with their medical care. Frances Cluett returned to teaching in Belleoram following the war in 1920 and died in 1969. Photo: Frances Cluett, wartime portrait in VAD uniform 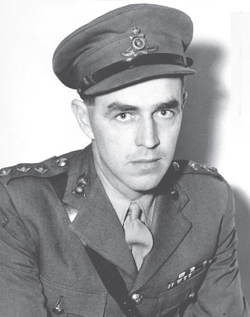 Born in St. John’s in 1920, Gordon Campbell Eaton enlisted in the 166 (Newfoundland) Field Regiment Royal Artillery at the outbreak of the Second World War with the service number 970001 –the second on the list of the “First Four Hundred” men in the regiment. After training in Britain and service in North Africa, Eaton achieved the rank of Captain. While acting as a Forward Observation Officer in the regiment’s first action in Italy at Furci in 1943, “for conspicuous bravery, coolness and outstanding conduct under fire” Eaton was awarded the Military Cross.

After the war, Eaton played a central role in the negotiation of benefits for Newfoundland veterans in Canada post-Confederation and became a prominent local businessman. His life-long volunteer and charitable work towards the betterment of his community resulted in his investiture as an Officer of the Order of Canada in 1978. Gordon Campbell Eaton died in 1994. Photo: Capt. Gordon Campbell Eaton, M.C., wartime portrait 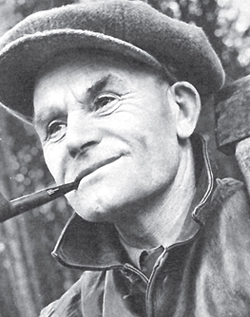 Born in Brookfield, Bonavista Bay, Newfoundland in 1885, Kenneth Gaulton worked as a logger and woods contractor for over 30 years before the outbreak of the Second World War in 1939. At the age of 54 and leaving behind a family of six, Gaulton enlisted in the Newfoundland Overseas Forestry Unit (NOFU).

The men of the NOFU worked in the forests of Scotland and England to provide the timber much-needed in the War effort. The Unit supplied wood products for British coal mining, telegraph poles, lumber for shipbuilding and other defense projects vital to war economy. As Camp Foreman, Gaulton devised the logging plans and maintained proper conduct of the camp.

After six years of service overseas, Gaulton returned to Newfoundland in 1946. He died in 1962, the same year that the NOFU’s wartime contribution was finally recognized under the Civilian War Allowances Act. Photo: Kenneth Gaulton on cover of Illustrated, 1941, Gaulton family collection 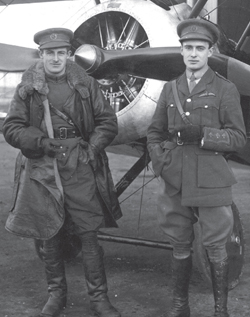 A native of Bay L’Argent, Fortune Bay, Group Captain Roy Stanley Grandy served with the Newfoundland Regiment at Gallipoli in the First World War and joined the Royal Flying Corps in 1916, flying missions over France with 43 Squadron. Postwar, Grandy delivered mail for Laurentide Air Services and did aerial seal spotting on Newfoundland’s northeast coast. He returned to uniform in 1925, joining the newly formed Royal Canadian Air Force. Grandy’s experience and skill saw him command stations at Rockcliffe, Winnipeg, Trenton, and Dartmouth. He returned “home” to Newfoundland during the Second World War to command RCAF Station Torbay and retired from the air force at war’s end. Grandy’s extensive service earned him the Order of the British Empire. He died in 1965 and was later inducted into Canada’s Aviation Hall of Fame. Photo: Grandy (left) 43 Squadron. 1918 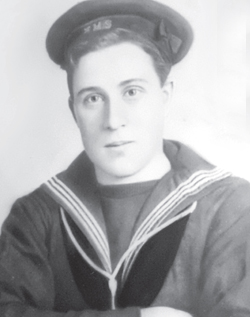 A native of High Beach, Fortune Bay, Stanley Isaac Hillier joined the Newfoundland Royal Naval Reserve in 1916 and trained in St. John’s Harbour aboard HMS Briton (formerly Calypso). Overseas, Hillier served on the battlecruiser HMS New Zealand, possibly the only Newfoundlander among its complement of 800. Hillier routinely sailed from Rosyth, and later Scapa Flow in the Orkney Islands, and was present during operations off Heligoland Bight in November 1917. Following sixteen months service on HMS New Zealand, Hillier completed a gunnery course at Devonport, attaining the sub-rating of seaman gunner. He sailed the North Atlantic aboard Defensively Armed Merchant Ships until war’s end. He demobilized to shore at St. John’s in April 1919, almost three years to the day of his enlistment. An active member of the Royal Canadian Legion for more than 50 years, Hillier died in 1989. Photo: Stanley Hillier, wartime portrait 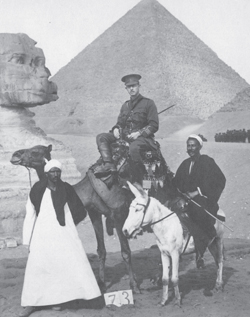 Born in St. John’s and qualifying as a doctor in 1901, Cluny MacPherson provided vital medical services in Newfoundland and Labrador, including the treatment of a smallpox epidemic on the southwest coast in 1909. With the outbreak of war in 1914 he joined the newly raised Newfoundland Regiment, serving as the Principal Medical Officer. He later was given other assignments and served in France, Belgium, Egypt, Salonika and Gallipoli throughout the war.

His most significant contribution came following the Battle of 2nd Ypres in May, 1915 with his development of the Macpherson hood, the principles of which provided the basis of future British gas masks which saved untold thousands of allied soldiers from injury and death. Demobilized and returned home in 1919 he continued serving his country and later province in times of peace as he had in times of war until his death in 1966. Photo: Dr. Cluny MacPherson, Egypt, 1915 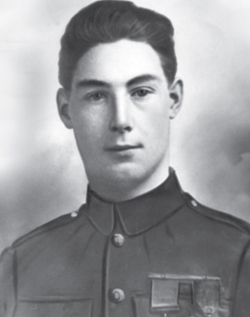 Born in Middle Arm, White Bay, Thomas Ricketts enlisted in the Newfoundland Regiment in September 1916 stating his age as 18 years old when in fact he was only 15. On 14 October, 1918, near Ledeghem in Belgium, Ricketts and his unit found themselves under devastating fire from German artillery. As cited in the London Gazette (January 6, 1919): “Pte. Ricketts at once volunteered to go forward with his section commander and a Lewis gun to attempt to outflank the battery…The enemy, seeing an opportunity to get their field guns away, began to bring up gun teams. Pte. Ricketts, at once realizing the situation, doubled back 100 yards under the heaviest machine-gun fire, procured further ammunition and dashed back again…and by very accurate fire drove the enemy…into a farm.” For his actions, Ricketts was awarded the Victoria Cross at 17 years old becoming the youngest member of the British Army in a combatant role ever to receive the decoration.

Thomas Ricketts returned to Newfoundland after the war becoming a pharmacist and businessman in St. John’s until his death in 1967. Photo: Sgt. Thomas Rickets, V.C., post-war portrait