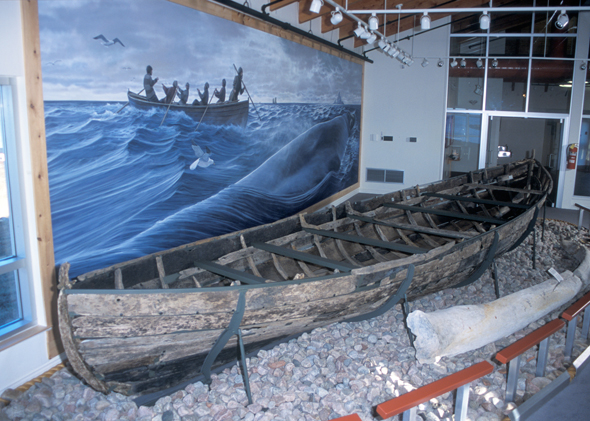 Underwater archaeology and the Basque vessels of Red Bay’s waters

Every year from the 1540s to the early 1600s, as many as 2000 Basque men and boys would leave their families in southern France and northern Spain to voyage over 4000 kilometres across the North Atlantic Ocean. These whalers were in search of North Atlantic and Greenland Right whales. Their lucrative destination was the Strait of Belle Isle and Quebec’s Lower North Shore. About a thousand of these whalers headed for Red Bay alone.

It was the painstaking research of historical geographer, Dr. Selma Barkham that helped to bring this once silent chapter of our Canadian heritage to the surface. Her work initiated years of archaeological research at Red Bay, a whaling port known to the Basques as Butus. From 1977–1992, numerous digs took place: the terrestrial archaeology was carried out by experts from Memorial University of Newfoundland, and the Province of Newfoundland and Labrador; the underwater archaeology was conducted by Parks Canada.

Then head of Parks Canada’s marine archaeology section, Robert Grenier, and his team of divers tackled the freezing waters of Red Bay harbour in search of ship wrecks that Dr. Barkham’s research indicated were there. To their delight, they discovered what is believed to be the San Juan, a Basque galleon that sank in 1565.

Nestled beneath this great find was a smaller boat known as a chalupa. It was well protected and preserved by the icy waters and blanketing silt. This rowboat measuring eight metres long by two metres wide is one of the greatest achievements in marine technology. Its construction has inspired boat builders well into the 21st century.

The craft was designed to handle tough conditions like strong tides and high winds. It held a crew of seven—one steersman and six oarsmen, including harpooner—that pursued and killed whales that were three times the size of their vessel.

Reassembly of the aged artefact took place at Parks Canada’s conservation lab in Ottawa. There, the wood was cleaned and soaked for several years in a tank of water and dissolved polyethylene glycol. This waxy mixture replaced salt water in the wood, keeping it from disintegrating. The 153 pieces were then freeze-dried. Experts reconstructed the boat mimicking the work of Basque boat builders hundreds of years ago. At the end, they constructed a custom-built aluminium cradle to ensure the chalupa’s journey back to Red Bay. It arrived safely on 1 July 1998.

The collective body of knowledge gained from the years of research at Red Bay has dramatically changed the understanding of the beginning of large-scale and overseas whaling, as well as the knowledge of the early European history of North America, particularly the role that the Basque played in it. Further in recognition of the importance of the Red Bay site to the discipline of underwater archaeology, a drawing of the vessel believed to be the San Juan, found in Red Bay Harbour, was selected as the logo for the 2001 UNESCO Convention on the Protection of Underwater Cultural Heritage.