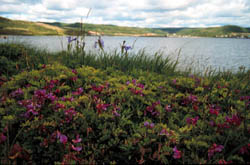 The Red Bay region has many features of more northern places, such as the treeless barrens which support a diversity of northern and alpine flora. The "tuckamore" - a growth of evergreens stunted by exposure to wind - mixes with the barrens.

While much of the coastline of the region is rocky, several of the large bays have extensive sandy beaches. These bays, carved from coastal highlands by ancient geological events, are favoured locations for human settlement.

A variety of birds make the barrens and the coastline their home - such as the harriers nesting in the hillsides and the murres in the near-shore waters. There is a multitude of floral species, many of them dwarf variants found usually in alpine environments.

Along the shore traces of the great array of marine life can be found - seashells, sand dollars and tiny hermit crabs, to name only a few. From vantage points on the coastal highlands, whales can be spotted breeching and diving as they feed.

Whales are frequently sighted in the area during summer and early autumn. The most common large species of whale is the humpback, which are usually seen in groups and noted for their classic roll and dive, which leaves their tail flukes in the air.

Fin whales are more solitary than humpbacks, and are usually spotted alone or in small groups. Their main identifying feature is the tall, column-like spout of exhaled air when they surface after a dive. Smaller whales include pothead, minke and occasional killer whales. Porpoises and dolphins (known locally as "jumpers") are common. 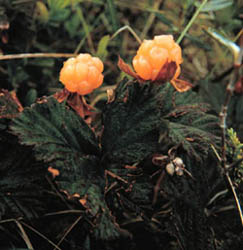 Many wildflowers that grow in the Labrador Straits are northern or alpine variants. In sandy areas near beaches there are dwarf irises, beach peas, silverweed, harebells, purple vetch, oysterleaf and a yellow sunflower-like plant called beachside senecio. On the barrens, Labrador tea, bog laurel, crackerberries, crowberries, blueberries and partridgeberries (also known as redberries or lingonberries) abound. Less common plants such as purple saxifrage, moss campion and willow herb may be found in some locations.

The Labrador Straits is famous for its bakeapples, which grow in abundance in the bogs and wetter areas of the barrens. Partridgeberries are plentiful on some of the dry barren ground areas. Rarer but very sweet and flavourful are wild strawberries and stemless arctic raspberries or "plumboys".