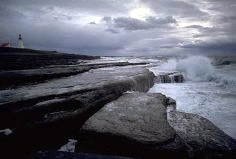 A natural resources inventory compiled in 1985 concentrated on the geology, vegetation and birds of this National Historic Site. The inventory noted that vegetation within the site is greatly influenced by the exposed, windy nature of the Port au Choix and Point Riche peninsulas. The Labrador Current often brings ice to this area from January or February to May. In the summer the area is subjected to major storms that leave the continent by way of the Gulf of St. Lawrence. Because of these factors, Port au Choix is one of the windiest places in Canada, and the area tends to receive more rainfall in the summer months than in other times of the year.

Vegetation in exposed areas is stunted and shaped by the wind. Behind the beach areas there are limestone barrens of heath, occupying about one-third of this site. There are two distinct types of heath - Empetrum and Rock. The Empetrum Heath has a continuous or nearly continuous carpet of vegetation - almost lawn-like in appearance. There are forested areas inland on both peninsulas. Tree height, however, rarely exceeds four metres (13 feet). Soil conditions are suitable for trees, but the strong onshore winds limit growth. As a result, in exposed areas the tree growth consists of dense stands of stunted fir and spruce called tuckamore or Krummholz.

The limestone or "Calcareous" barrens of Newfoundland's Northern Peninsula form a unique landscape type, and make up one-third of the land mass within the Port au Choix National Historic Site. In contrast to the acidic soil of most of Newfoundland, the calcareous barrens consist of basic rocks and soil underlain by limestone bedrock. The barrens are characterised by large expanses of bare gravel, resulting from wind erosion and frost action. Evident within the gravel are stone strips and rock boils created by the natural process of freezing and thawing.

The barrens support many species of plants that are at their most southern limit of distribution. These calcium-loving plants (calciphiles) have adapted to the basic soils, and a climate with arctic-like conditions. Many of the plants in this habitat are considered rare to Newfoundland and several are listed by the Committee on Status of Endangered Wildlife in Canada (COSEWIC) as "threatened" or "endangered". Of the 271 vascular plants considered rare for the island of Newfoundland, 114 inhabit these barrens, and 29 of them are only found in this habitat. The Port au Choix site contributes significantly to the protection of this natural heritage by protecting 47 rare plants within its 8km square boundary.

The Dorset Trail leads hikers from the Visitor Centre to the archaeological site at Phillip's Garden. Visitors pass through a variety of habitats, including limestone barrens, and can observe many plant species. For the protection of these plants, we request that hikers stay on the marked trail.

Bird life is influenced greatly by the Town of Port au Choix. The fish plant has attracted a very large number of gulls and common terns. Concentrations of these aggressive birds keep away many other species. Most of the shoreline is too exposed to provide good feeding areas for shorebirds, and the simplicity of vegetation restricts the diversity of bird-life dependent on ground sites. As a result, it is believed unlikely that more than 20 to 25 species of birds actually breed within this site, although 49 species were recorded during four days of field observations in September 1984.

In addition to the flora and fauna at Port au Choix, the site has another significant natural resource: its geology. The limestone bedrock has played an important role in preserving artifacts. It has also preserved the geological record. Fossils in the bedrock along the shore between Point Riche and Port au Choix
have already attracted the attention of Park visitors.