The Maritime Archaic Indians were the earliest known people to frequent the Port au Choix area. They were called this for two reasons: "Archaic" because these people were hunters and gatherers and did not farm, and "Maritime" because they relied on the sea and its products to sustain themselves.

The Maritime Archaic Indian tradition dates from 7500-3500 years before present (B.P.). These peoples lived throughout Atlantic Canada, Maine, and ranged into parts of Northern Labrador. Their ancestors, the Palaeoindians, arrived in Labrador around 9000 B.P. Archaeologists are able to distinguish this group of people by their use of marine resources, their beautifully crafted ground and polished slate knives, distinctive bone artifacts, and their ceremonial burials, which included using cemeteries and red ochre. 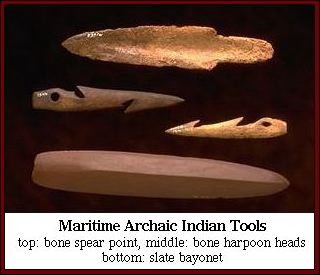 Port au Choix contains three Maritime Archaic cemeteries, where burials took place between 4400 and 3300 years B.P. An excavation at Point Amour, in Southern Labrador, uncovered an elaborate burial of a 12 year old child that dates back to 7500 B.P. The sites have provided a rich variety of bone, stone, antler and ivory tools, as well as weapons and ornaments. The items found here have provided information on various aspects of Maritime Archaic society including their magical and religious beliefs and practices.

The 117 skeletons uncovered in the cemetery were fairly equally divided along sex lines. The Maritime Archaic Indians' height was on average 5'6" for males and 5'3" for females. Studies done on the skeleton collection indicate that there was a high infant mortality rate among the group. One-third of the young died before the age of two, and only one-half lived to adulthood. However, those who reached adulthood lived on average 43 years and some would reach their 50's.

These people were healthy. The major disease found was arthritis mostly in the arms and hands, which is common for a physically active lifestyle. There were a few incidents of healed fractures, but nothing to indicate excessive violence. Only four cavities were found among the skeletons studied. This can be related to a diet that had no sugar. The teeth were well worn however, from years of eating a gritty diet (coarse meat) and from chewing hides to soften them. They were often so worn down that the pulp was exposed, leading to an infection that would have been quite painful.

Two cases of a very rare disease called Histiocytosis X was found in two young children. It is believed to be a genetic disease, which afflicts one in two million people today. The first evidence of this disease is that found in the Maritime Archaic Cemetery at Port au Choix.

The people of Port au Choix, referred to as Northern Hunters and Gatherers, lived off the natural resources of the land and sea rather than by agriculture.

The hunting tools and bones of animals, fish and birds discovered in the graves indicated that the people of Port au Choix crafted efficient weapons to exploit their environment.

No evidence of collecting activities has survived, but these people, sensitive to their natural environment, must have gathered the berries, birds' eggs and shellfish that even today are common around Port au Choix.

Artifacts also show techniques used in crafts and manufacturing. Trees were felled with ground stone axes. Stone or ivory adzes and stone gouges were used for shaping. Fine woodworking was done with small knives made from beaver teeth in wood or antler handles. One of these knives was found intact at Port au Choix. It resembles the "crooked knife" made from iron and wood that is still used by many northern peoples. Bone, antler and slate were favoured raw materials.

Canada's native people of several thousand years ago are often pictured braving the elements in no more than a crude skin wrap. Despite the disintegration of all the clothing in the graves, there is evidence that the people of Port au Choix dressed for the cool climate of northern Newfoundland. Fine needles made of bird bone, some with eyes less than 0.5 mm wide, probably were used to sew the tight seams needed for waterproof boots, leggings or jackets.

Every effort was made to decorate the clothing. Rows of seal claws, small bone pendants, and beads adorned the lower hem of shirts or jackets. Shell beads and other ornaments were sewn on caps or hats. 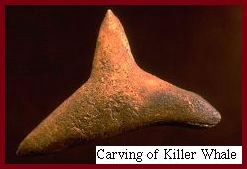 Among most native North American peoples there was, and still is, a close relationship between art and religious practices. We can assume that the same was true for the people of Port au Choix. The small art objects that they wore and the carvings that decorated their possessions were not only cherished for their beauty but also for their magical powers. By carrying the image of a gull, merganser, loon, or other diving bird, the owner hoped to acquire the bird's skill in fishing; the carving of a bear might increase the strength of its wearer. A beautifully carved killer whale nearly 20 cm long indicates the great respect the Maritime Archaic Indians had for this mammal, it's strength and hunting abilities. The burials themselves show a preoccupation with life after death. The red ochre sprinkled over the bodies was a symbol of life. The many tools, weapons, and ornaments included in the graves indicate a belief in a life after death that was much like life on earth.

What Happened to the Maritime Archaic Indians?