The Dorset Paleoeskimo is also an Arctic culture which expanded southwards and reached Labrador around 2500 years and arrived on the island of Newfoundland approximately 500 years later. 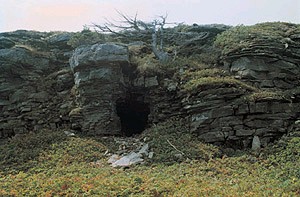 The site at Phillip's Garden is very rich and one of the largest Dorset sites in the eastern Canadian Arctic. The site contains at least 50 house depressions and thousands of artifacts. Many of the bone artifacts were preserved in the alkaline soils thanks to Port au Choix's limestone geology. Among these artifacts were many harp seal bones, indicating the importance of this resource to their survival. Unlike the Groswater Paleoeskimo, it is believed that the Dorset occupation was a much more permanent settlement.

The overall spacing and greater organization of the houses, suggest a more permanent settlement rather than just a seasonal occupation. Excavation of the site has revealed a variety of dwelling features suggesting occupation in different seasons. The variety of excavated tools also indicate the site was much more than a specialized hunting camp. Some of the tools include sled runners, soapstone pots, awls, burin-like tools, scrapers, harpoon heads and small triangular harpoon endblades (as seen above) characteristic of Dorset technology.

The Dorset Paleoeskimos seemed to have disappeared from Port au Choix about 1300 years ago and from the island of Newfoundland by 1100 years B.P. Their disappearance from the island may be connected to the appearance of a new Indian population in the area at the same time, although the Indians could have returned because the Dorset had vacated the area. Another possible reason for the Dorset's abandonment of the island may be the result of a warming climate that occurred at this time. It is possible that an Arctic and Sub-arctic adapted culture would no longer find Newfoundland suitable. Ice conditions would have changed. This, in turn, could have affected the ability of these people to access the seal herds on which they were so dependent.

For whatever reason the Dorset disappeared from Newfoundland, it is known that they continued to survive in northern areas of Labrador until 600 years B.P.