Discovers of the Past, A History of Archaeological Excavations

1910
A.V. Kidder, well-known American archaeologist, purchases artifacts from Mr. Billard and deposits them in the Peabody Museum in Harvard University.

1915
Reference to archaeological material at Port au Choix is found in James Howley's book, The Beothuks or Red Indians of Newfoundland.

Fall 1967
A bulldozer excavating the basement for a new building unearths a number of human bones and various artifacts. James Tuck of Memorial University investigates this discovery and makes plans to return the following summer.

1968-69
James Tuck and his crew excavate this new site and uncover 90 graves. Site is defined as a Maritime Archaic Indian cemetery. The Maritime Archaic living site assumed to be associated with this cemetery was not found.

1984
With the assistance of Parks Canada, Dr. Priscilla Renouf of Memorial University conducted a survey of the area's archaeological sites. Her crew located several prehistoric and historic sites, including relocating sites previously found by Harp and Tuck.

1984-86; 1990-92
Renouf and her crew excavate 10 prehistoric sites and intensively test one historic site. The team searches for the Maritime Archaic Indian habitation site in the southeast area of town. After digging a number of pits, the team doesn't turn up any evidence of Maritime Archaic Indian material. However, tools and tool-making materials belonging to the Recent Indians are found at the Spence Site.

1996
Dr. Priscilla Renouf partners with Dr. Trevor Bell of Memorial University's Geography Department to investigate the relationship of archaeological sites and sea level history. By using sea level models and surveying local residents' archaeological collections, they determine a possible location of the Maritime Archaic Indian habitation site in the southeast area of town - the area tested in the 1990 to 1992 field seasons.

1997
Renouf and her archaeological team retest the southeast area of town at eight and ten meters above sea level. At the Gould site, they find two hearths carbon dating to the period of the Maritime Archaic cemetery and several Maritime Archaic Indian artifacts.

1998
Renouf and her team continue excavating the Gould Site and uncover thirteen hearths as well as preserved wood positioned in postholes. These findings help support the idea that this actually is the Maritime Archaic Indian habitation site.

In the Recent Indian component, several preserved pieces of hide were found along with several shards of ceramic material.

At the Maritime Archaic Indian level, dozens more postholes are discovered in this ancient beach terrace. Further research is required to identify their significance. Some possible explanations are that they were postholes for houses, tents, drying racks and maybe storage pits. 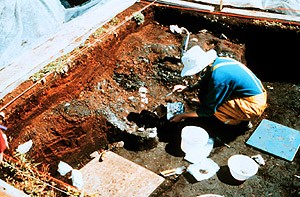 2001
A magnetometry site survey of the Dorset Palaeoeskimo site at Point Riche was completed to help determine the range of cultural variability. One of the house depressions was also excavated to gather additional data on dwelling structures and associated cultural material.

2002
A survey of upper terraces above Phillip's Garden was completed in an attempt to locate reported tent-rings, however the survey did not reveal any evidence of tent-rings.

To learn more about archaeology at Parks Canada.