A Saga of Discovery

The early accounts of Viking discoveries, including their discovery of North America, come to us from the sagas: ancient Norse stories that were told by word of mouth for many years, and later written down for future generations to read. (The earliest written version of the sagas dates back to the 12th century.) The beginning of the Vikings’ movement westward toward North America can be traced by reading in the Sagas of the sea voyages of Erik the Red and Bjarni Herjolfsson.

Section of the saga of Eric the Red
© Parks Canada

According to these sagas, nearly 1000 years ago, a stout, high prowed vessel from Greenland cast anchor in an inviting bay somewhere along the coast of North America. Its single square sail was furled, and the 30-man crew stepped ashore. To the north of them, a point of land extended into the sea; beyond it was an island. The land along the coast was low and gently rolling. Lush meadows, sheltered by forests, covered the ground. A small stream flowed from a lake a short distance away. The tides were spectacular. When the tide was out, the entire bay became dry land.

Enchanted by what they saw, the newcomers decided to stay. They moved their ship into the stream and set up camp on the shore. By making short excursions they became familiar with the country, which they found incredibly rich. The streams were teeming with salmon. There was plenty of timber and the climate was so mild that the grass stayed green even in winter.

In this way the 13th century Greenlanders’ Saga describes Leif Eiriksson’s historic first contact with the continent of North America, five centuries before Columbus. The Saga relates that one of Leif’s crew, Tyrkir the German, straying from the settlement one day, found grapes growing wild in the forest. This was an exciting discovery, one that led Leif to call the new land Vinland, Land of Wine. Early next summer Leif and his crew returned to Greenland, their ship heavily loaded with a cargo of lumber and grapes—the latter probably as wine or raisins. The lumber was of special value to the Greenlanders who had no local timber suitable for building.

Leif’s luck in the new country enticed others to come. Thorfinn Karlsefni, an Icelandic trader visiting Greenland, headed one such expedition. His expedition may have included as many as 135 men and 15 women, livestock, and three or more ships. They used Leif’s camp as a base and spent several summers exploring and laying up a cargo of lumber, pelts, and other things that could be sold for profit in Greenland or Europe.

Karlsefni’s group met the native inhabitants whom the Norse called skrælings. Soon clashes broke out between the Norse and the skrælings. Greatly outnumbered, the Norse returned to Greenland. On one of the voyages—it could have been Leif’s, Karlsefni’s or that of another Norse ship master—the explorers settled for a time at the head of Newfoundland’s Great Northern Peninsula at a place now called L’Anse aux Meadows. 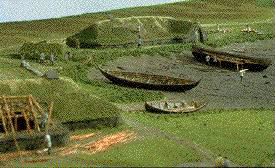 Here they built a small community, a short distance inland on a narrow gravel terrace by a water-logged peat bog, close to a small stream. We do not know how long they stayed—perhaps only a few years—but they lived here long enough to build substantial houses, several workshops and a small forge, where for the first time iron was smelted in the New World. After they left, the buildings decayed and nature reclaimed the land.