Ask Parks Canada staff about current bear activity. Some areas may be closed due to bear activity; obey written and oral warnings.

Be alert and aware of your surroundings. Scan all around with binoculars at regular intervals. Be vigilant! Watch for signs such as tracks, droppings, diggings, wildlife carcasses and polar bear dens.

Travel in daylight and avoid areas of restricted visibility. Be especially careful in areas along the coast, where a polar bear may be hidden behind boulders, pressure ridges (pushed-up sea ice), driftwood or vegetation.

Travel in groups and stay together to increase your safety. The larger the group the greater the chances of deterring a bear. 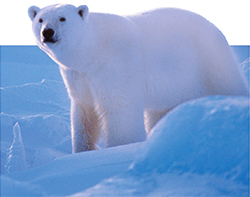 Never approach a bear for any reason.
© Parks Canada

Never approach a bear for any reason. Every bear defends a “critical space”, which varies with each bear and each situation: it may be a few metres or a hundred metres. Intrusion within this space is considered a threat and may provoke an attack. Approaching a bear could be considered disturbing wildlife which is an offence under the National Parks Wildlife Regulations.

Never approach a fresh kill or carcass as polar bears will defend their food. Adult polar bears will often only eat the fat of beached whales, seals and other kills, but other bears may scavenge from these carcasses.

Never feed bears. A bear that finds food from a human source begins to associate humans with food. This can result in the bear losing its natural tendency to avoid people and becoming persistent in its search for human food. The consequences for you and the bear can be serious. A bear that associates food with humans is more likely to injure people and these bears may have to be relocated or killed. It is also illegal to feed any wildlife in a national park.

Use sealed bags and containers or bear-proof canisters to store food and garbage. Pack out all garbage.

Eliminate or reduce odours from yourself and your camp. Avoid using scented soaps and cosmetics and avoid bringing strong-smelling foods.

Consider hiring a guide if you are uncertain about your ability to deal with polar bears. Ask about their experience, how they will avoid encountering a polar bear and about plans of action should you encounter a bear. A larger group can also increase safety, so ask about the size of the group.