History of Prince of Wales Fort

Once established at York Factory on the Hayes River, the Hudson's Bay Company (HBC) looked north to increase its scope of trade and profit in Rupertsland. A trading post was built on the Churchill River by the HBC primarily to trade with the Dene peoples, Inuit from the northwest coast of Hudson Bay, and the Cree living north of the Nelson River. It was a base for northern exploration, whaling, and the search for precious metals.

Archaeology in the Churchill area shows evidence of human presence dating back 4000 years. Aboriginal groups came into this area to harvest animal resources from large mammal migrations. Throughout the history of HBC's operations at the mouth of the Churchill River, nearby Dene and Cree families known as Homeguards, provisioned the post with meat, fish and country-made articles, primarily cold-weather clothing and snowshoes for winter travel. They served as guides and couriers, trappers, provisioners and consumers. First Nations peoples were crucial to the success of the fur trade throughout its long history on the west coast of Hudson Bay.

Jens Munck, a Danish explorer who led an ill-fated expedition in search of the Northwest Passage, was the first European to winter in the Churchill area (1619-20). Ill-prepared for winter, he and all but two of his crew of 64 perished from the effects of scurvy, trichinosis and exposure. His wintering site, approximately eight kilometres from the mouth of the river was chosen by the HBC to establish a trading post in 1689. This post burned that year but was re-established in 1717. After one season of work at Fort Churchill, Governor Knight, in describing the region candidly reported to London that, ".... York Fort is bad but this is ten times worse." As construction progressed through the spring and summer of 1718, Knight requested that the Governor and London Committee name the new post. They chose 'Prince of Wales' Fort, to honor the royal family of England.

By the late 1720s the uneasy peace between England and France threatened to disintegrate, and in 1730 the HBC authorized the construction of a stone fortification at the mouth of the Churchill River. Eskimo Point, the rocky northern peninsula commanding the entrance to the Churchill River, was selected for its strategic location – the mouth of the Churchill River is 640 m across and was considered to be quite defensible. The availability of raw material (quartzite and limestone) for building, and a natural harbour upriver called Sloop Cove increased its value. Prince of Wales Fort II was built to protect the Company's cargo ships. In the event of war, ships' crews could be employed in the defence of the Fort and the Company's holdings on Hudson Bay. Twenty-four tradesmen and labourers were sent from England in 1731 to begin construction. On June 3, 1732, the first stone was laid for the foundation. Chief Factor Richard Norton predicted the structure would take six or seven years to complete using four team of oxen and 84 men.

Prince of Wales Fort II took more than 40 years to build. The popular European 'star' shape construction with four protruding bastions was selected but its massive size and small construction crew made for slow progress. The time the men spent just surviving further delayed the work and was complicated by the short building season. On remote Hudson Bay crews had to hunt food, cut wood, haul water and, of course, continue to trade for fur. Furs were prepared for shipping to England, accounts kept, and trade goods stored for the next trade season. 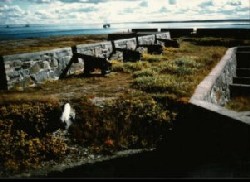 Prince of Wales Fort outer walls were 6. 5 m high, 11 m thick and were divided from the inner wall by an earthen rampart. Forty cannon were mounted within the embrasures along the parapet and commanded every approach to the fort, hence the name 'flanker fort'. The main gate was protected from direct attack by a stone structure called a ravelin.

Hudson's Bay Company employees at the fort were divided into three categories: officers, tradesmen and labourers. The officers were the governor, surgeon, sloop master, deputy governor and the clerk writer. Benefits of higher pay, a varied daily routine and diet, more leisure time and private accommodations reflected their status. Tradesmen were stone masons, carpenters, the blacksmith, armourers, coopers, tailors and other skilled employees. Labourers carried out much of the day to day unskilled work at the post, such as loading and unloading ships, hunting game, hauling water and chopping wood. 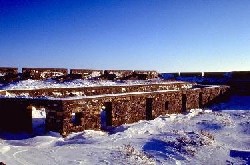 Chopping wood occupied much of their time, as it took four carts of wood a day in winter to warm the living quarters. As one post governor reported in 1741, the fort's living quarters were "... very cold, freezing everything in the cabin, though a fire kept in from five in the morning till nine at night; and when the fire is out, a red hot shot, twenty-four pounds weight (a cannon ball) hung up at the window to thaw it; on the outside there are shutters to every window, six inches thick; four large fires made in the stoves every day - a cartload of wood for each; yet all this will not keep things from freezing within doors."

The conditions inside the Fort were harsh; the extreme cold, the smoky quarters, incessant bugs and random violence that passed for discipline were day-to-day realities. Despite the discomfort, men would readily renew their contracts to stay on with the Company, because life at a Hudson's Bay post offered a chance for advancement, a place to live with fairly decent food, and a dependable wage which was much preferable to the uncertain future and hardship back home in Europe. 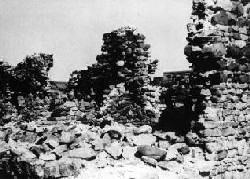 In the 1920s, the Historic Sites and Monuments Board of Canada , recognized the Fort as being of national significance. The Parks Branch of the Department of the Interior (now Parks Canada) took responsibility for its preservation, and, when a large workforce became available with the completion of the railroad into Churchill, the men and the heavy equipment began reconstruction of the fort in the 1930s. The Fort still stands today as an important memorial of the French-English rivalry for control of Hudson Bay and its resources.