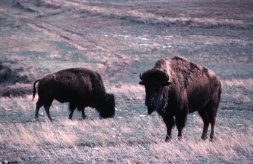 Winnipeg. The quintessential prairie city? Flat. Windy. Open. In some locations that might be the case today, but as recently as 200 years ago, the area around The Forks was covered by a forest of oak, poplars and basswood interspersed with prairie.

Traditionally, the riverbanks of The Forks sustained Manitoba Maple, Elm, Cottonwood, Green Ash and Basswood trees - all distinctive of a broad leaf deciduous forest. On higher and drier sites, above all but the greatest flood zones - Bur Oak and Aspen were common. These river forest and parkland species blended into the drier prairie on the uplands.

Large game, especially bison, used these wooded river valleys in the parklands belt for winter shelter, retreating from the wind-swept plains during the coldest parts of the year. They attracted First Nations people and predators such as wolves and bears to the area.

Today, the remnants of that deciduous forest are evident and follow the Red, Assiniboine and Saskatchewan River valleys, while Winnipeg has extended this area's original landscape with an urban forest of elms and other trees, mostly planted by early citizens. By climbing the tower at The Forks Market on a summer day, you can look out over the city's cool green canopy of leaves.

The Forks is in the flood plain of the Red and Assiniboine rivers. They are prone to flooding when accumulated winter snow rapidly melts in the spring. Very little water is absorbed into the thawing ground, and most of it flows into the rivers in just a few weeks. The burgeoning rivers then spill over their banks and flood the broad, flat valley.

One of the largest of these floods, in 1826, destroyed the original Fort Garry. The Red River rose three metres (nine feet) in one day. It created a lake that remained for months and washed away nearly every building in the settlement. When it finally receded, the Fort was rebuilt on higher ground and made to withstand flooding.

The City of Winnipeg has been protected since 1968 by a flood way, an engineered ditch that can divert large water flows around the city. But while flooding has historically been a frequent danger to property, it has also enriched the soil of the Red River Valley, an important factor in attracting permanent settlement along the rivers.

Years ago, European settlers replaced bison with cattle, and native prairie plants with grain and other crops. To celebrate the site's former natural heritage, The Forks has planted gardens of native tall grasses mixed with beautiful wild flowers that create living and breathing patches of history.