Fort St. James National Historic Site is surrounded with incredible natural beauty which had a tremendous influence on the early experiences of the Fur Traders who lived here in 1896. Aboriginal people have long had a strong and spiritual tie to the lands where Fort St. James is located. Visitors to the historic site will be stunned by this incredible natural legacy the first time they come to visit. Some of our immediate natural features of importance include:

Fort St. James is situated on the shores of Stuart Lake, a spectacular 80 km body of water stretching deep into the heartland of BC’s interior plateau. The lake has long been home to aboriginal residents for thousands of years and is dotted with a wide array of islands, rocky bays and spectacular limestone cliffs immediately NW of the town of Fort St. James. Parts of Stuart Lake are protected in a series of provincial parks throughout the region, including Mount Pope Provincial Park and Rubyrock Lake Provincial Park located on the North Arm.

Recreational opportunities on the lake are endless and include quiet canoeing and kayaking to popular boating and fishing activities. Yearly, the lake plays host to several major events, including the Stuart Lake Fishing Derby in July and the Caledonia Classic Dog Sled Races on the frozen ice of Stuart Lake every February. Accomodation includes several campgrounds and remote fishing lodges on the north arm of the lake. For more information about Stuart Lake, contact the Fort St. James Chamber of Commerce Visitor Information Centre. 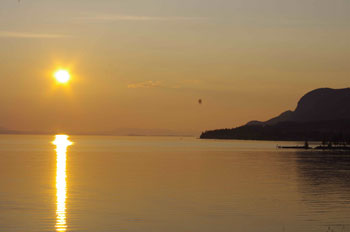 Draining the vast reaches of Stuart Lake is the mighty Stuart River, a provincially designated heritage river due to it’s significance as a travelling route and waterway in BC’s early fur trade history. The river itself is not long, only 110km from the mouth of the lake to the river’s terminus at the Nechako River, but it’s importance in regional history is substantial. Early aboriginal peoples hunted and fished the waters of this river for their basic staple of life, the salmon. Fur brigades, beginning with Simon Fraser in 1808 made regular use of the river on their way to the Pacific Ocean to Fort Langley and Fort Vancouver. And during the late 1800’s, the lure of the Omineca Gold rush led to the use of the river as a gateway for sternwheelers bringing goods and supplies from Quesnel, BC on the Cariboo wagon road to be used in the vast prospecting reaches found to the north, west and east of present day Fort St. James. 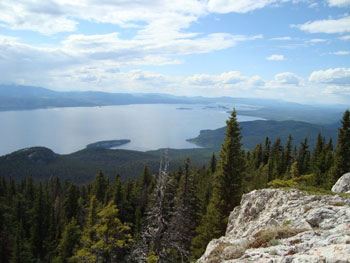 View from the summit of Mount Pope trail
© Parks Canada

The Carrier name for this Historical trail is Nak’al, meaning “with blood and arrows the river flows.” The trail length is about 6 Km (3.7 miles), the hiking time to the summit is 2-3 hours and the elevation gain is 791 meters (2,595 feet).

Franklin Leonard Pope was born in Great Barrington, Massachusetts on December 2, 1840. He was a mentor of Thomas Edison, he was also a telegrapher, electrical engineer, explorer, inventory and a patent attorney. He was a major contributor to the technological advances of the 19th century. He died on October 13,1895 at the age of 55 years, from an accidental electrocution in the basement of his home in Great Barrington.

The placid and historical waters of Stuart Lake are also home to one of Canada’s most incredible, and endangered species of fish: the Nechako White Sturgeon. With a long historical tie to the early fur trade as a mysterious and misunderstood species, the sturgeon is now fully protected and recovery efforts in the region are underway. Where thousands of sturgeon used to exist in the Nechako and Stuart River system, today’s populations are fewer than a few hundred.