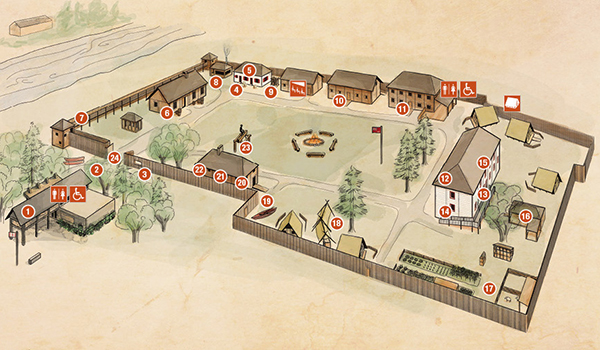 Note: Numbers correspond with the audio tour. To hear Fort Langley’s complete story, pick up your audio tour at the Visitor Centre.

2. Pathway - Imagine life before cars, trains, and buses. You would have arrived at the fort by dugout canoe or a Hudson’s Bay Company boat.

4-5. Storehouse - Built in the 1840s, the Storehouse is the only remaining original building at Fort Langley. The rest were constructed more recently.

6. Cooperage - William Cromarty, Wavikarea and other coopers built barrels that were used to ship salmon, cranberries, farm produce and other goods.

7. Bastions gallery - Even before the fort had houses, Chief Factor James McMillan built bastions and palisade walls. Protecting trade goods was a priority. This gallery was a lookout.

8. Blacksmith - Blacksmiths like James Taylor forged iron tools to trade with Aboriginal people. The iron hardware was also used at Fort Langley and other HBC posts.

9. Fur press - Lean on the lever to see how furs were compressed before being shipped to London.

11. Café - The café is open seasonally. The depot that was once here stored goods awaiting shipment to the interior. Upstairs, a sales shop sold supplies to the employees and, later, to the gold miners.

12-15. Big house - Home to the fort’s managers, this building was reconstructed in 1958, 100 years after the Colony of British Columbia was announced here.

16. Kitchen shelter - Narcisse Fallardeau and his Kwantlen wife Hélène served the residents of the Big House from their house and kitchen at this location.

17. Farm and garden - Company clerk William Newton managed a nearby dairy farm as well as a vegetable and grain farm about 6 km south of the fort.

18. Gold panning - In 1858, many prospectors stopped at Fort Langley to buy supplies before continuing up the Fraser River to look for gold. Now it’s your turn!

19. Bateau - Boat builder Samuel Robertson made bateaux like this one. These sturdy river boats transported furs to Fort Langley from the interior posts and returned with trade goods.

20-22. Servants’ quarters - Young Helen Robertson lived here in an apartment with her brother and sister, her Scottish father Samuel and her Kwantlen mother Julia. Their neighbours included HBC employees from places like Hawaii and Quebec, their Aboriginal wives, and children.

23. Saw pit - Cutting planks was a tough job. Hawaiians like Como and Peopeo sawed all day long, making planks for floors and roofs.