“... like some fantastic dream from a tale of the Arabian Nights.”

That is how William McCardell described the mist-filled cave on the slopes of Sulphur Mountain in Banff when he, his brother Tom, and their partner Frank McCabe first saw it in the fall of 1883.

Considering the archaeological evidence of human habitation in the Bow Valley that dates back 10,000 years, and First Nations stories about the cave and warm waters we know that these Canadian Pacific Railway workers were not the first to discover these springs. But, recognizing the potential profit flowing in these mineral waters, the railway workers erected a fence around their “discovery” and built a log cabin near the entrance to the cave. They unwittingly created the first crude boundary around what would eventually become Canada’s first national park. 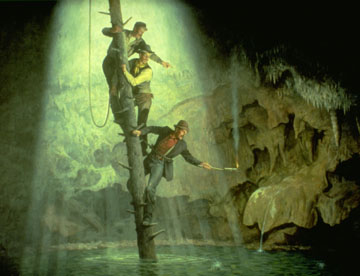