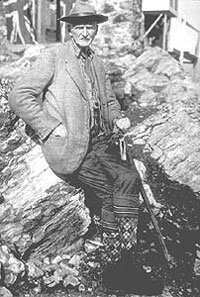 The museum was the child of the old Natural History Branch of the Geological Survey of Canada. In February 1895 a shipment of mounted and labelled specimens arrived in Banff. It included eight mammals, 259 birds, a turtle, 57 specimens of wood, 814 plants and 201 mineral samples. John Macoun of the Natural History Branch described these specimens as "an almost complete representation of the birds and flowering plants found within the limits of the park." The Branch had been in charge of developing exhibits for the World Exhibition which took place in Chicago. In addition to the natural history specimens themselves the park museum received an abundance of display furniture when Macoun's staff dismantled the Canadian pavilion, following the end of the 1893 Exhibition.

Further inheritances to the collection were documented in a hand book of the museum, written by Harlan Smith of the National Museum in Ottawa. Another important figure, Norman Bethune Sanson the museum curator from 1896 to 1932, actively collected in the field and assisted Smith in the arrangement and the expansion of the collections. Sanson was not replaced after his retirement, and the collections we see today is largely a representation of the 1914 era.

The 1903 museum building is the largest and most elaborate example of the early phase of park design utilizing decorative cross-log construction. The large windows, clerestory lantern and the cantilevered truss system which support the second floor demonstrate unique approaches to the need for natural light and spatial requirements of the museum. The exterior is of distinctive shape, with a layering of shingled roof surfaces moving from the wide bracketed verandah eaves to the hip roof to the large central lantern. The walls are of crossed-log veneer with protruding shingled bays at the mezzanine level (upper floor).

On the interior, the lantern provides natural light to both levels. The wood finish, trim and detailing, including display cases and other furnishings, are for the most part originals to the building. Recent restoration work has allowed the recovery of some elements and the sympathetic insertion of new work. The high quality of materials and craftsmanship throughout indicates that the building was clearly intended as a showpiece for the park. Its distinctive appearance described today as "a railway pagoda" is a local landmark. Its graceful design, elaborate use of Douglas Fir and the setting contributes strongly to the character of the town.

First established in the summer of 1895, the park museum was moved to the present building in 1903. The oldest surviving building Parks Canada maintains was constructed by the federal government to the designs of John Stocks, an engineer with the territorial public works office.

It was declared a National Historic Site of Canada by the Historic Sites and Monuments Board of Canada in 1985, and designated "Classified" in 1986, by the Federal Heritage Buildings Review Office in order to protect, preserve, and present the museum for present and future generations.

The museum today displays an extensive collection of natural history specimens (more than 5,000) which are characteristic of early museum practices. The emphasis is on changes in attitudes toward natural resource management. Although the building, the collection, and the grounds have been modified over time in response to the demands of the day, the developments and treatments are "in keeping" with the historical significance of the building and collections themselves.