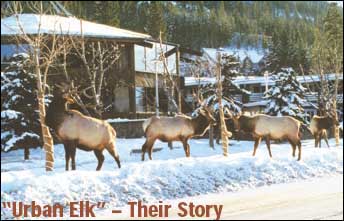 In park townsites, you may see elk peacefully mowing someone's front lawn or pruning the back yard shrubbery. They look pretty tame, but they're not. They are wild animals that have learned to survive in a place that's full of people. 'Urban' elk have the same needs as other wild animals: they need to feed, rest, mate, and bear young – undisturbed. If these needs are not met, survival is threatened. And whenever a wild animal perceives a threat – say someone approaching too closely – it is likely to attack. The only other option is to run away, but in populated areas there just aren't many places for an animal to run. Instead we're the ones who must "back off".

This Is Also Cougar Country

Cougars are not often seen because they are solitary, elusive and active mainly at night. They may be more active in areas that have habituated deer, like towns and campgrounds. Avoid meeting a cougar by travelling in groups and making lots of noise. 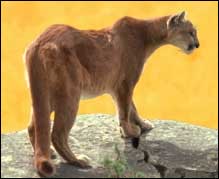 Keep children close to you. Free roaming pets may attract and be attacked by cougars.

If you encounter a cougar:


Give Them the Space They Need 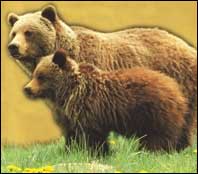 Please do your part to limit the impact that so many people have on park wildlife. Give all the animals you see the respect they deserve and the space they need. Enjoy a safe visit and ensure that future generations have the chance to see wildlife that is truly wild.